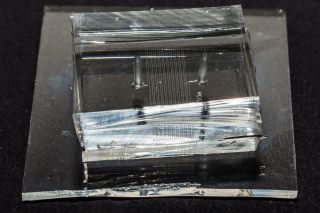 Researchers have designed a super stretchy, strong and sustainable material that mimics the qualities of spider silk, and is 'spun' from a material that is 98 percent water.
(Image: © University of Cambridge)

With the new "Spider-Man" movie breaking all kinds of box office records this week, the time seems right for an update on laboratory preparation of synthetic spider silk.

Chemists and material science researchers have been intensely interested in spider silk for several decades. It really is one of nature's miracle substances with certain strains of spider silk having greater tensile strength than steel.

A team from the University of Cambridge collaborated on the research, published today in the journal Proceedings of the National Academy of Sciences. Funding for the research was provided in part by the UK Engineering and Physical Sciences Research Council (EPSRC) and the Leverhulme Trust.

The fibers designed by the Cambridge team are spun from a soupy material called hydrogel, which, depending on the chemical recipe, is comprised of up to 98 percent water. The remaining 2 percent is made up of silica and cellulose — both natural materials.

By manipulating specific chemical interactions, scientists can pull long single fibers out of the hydrogel, held together in tight molecular structures known as cucurbiturils. These individual fibers are thinner than a human hair, but can be "braided" into thicker fibers.

RELATED: This Sports Bra Checks Your Heart Rate and Recharges as You Move

All industrial textiles use yarns or braids of some sort, Shah said, but their recipe for synthetic spider silk has several benefits. The most immediate advantage is to their approach is the fibers self-assemble at room temperature, held together by a "supramolecular host-guest chemistry," which allows manufacturers to avoid dealing with toxic substances or working in extreme heat.

Shah said the new process can be used to make traditional textiles, but also so-called "technical textiles" that are much tougher than your average pair of jeans. For instance, the fibers can be woven into shrapnel-resistant military clothing, sailcloth for boats, or lightweight fabrics for parachutes and hot-air balloons.

"Since the fiber is made from natural, biodegradable material — silica and cellulose — it's fully biocompatible," Shah said. "There are numerous opportunities for exploitation in biomedical applications where energy absorption is critical — such as devices for back or spine injuries. By altering the chemistry and introducing tiny amounts of other materials, we can use these fibers for sensing applications and health monitoring."

Shah said that the new chemical process could potentially be used to improve other kinds of synthetic fibers too.

"Industrially produced synthetic fibers rely on toxic solvents and high energy methods, with temperatures well exceeding 200 Celsius — even up to 1,500 Celsius in the case of carbon fiber," Shah said. "Whereas we are able to produce fibers using water as a solvent, and at ambient temperatures and pressures."

The new Cambridge process was very much informed by nature, Shah said. After all, spiders don't need toxic chemicals or fiery temperatures.

"Spider silk is our inspiration, as spiders have evolved over hundreds of millions of years to produce superb fibers using low energy."