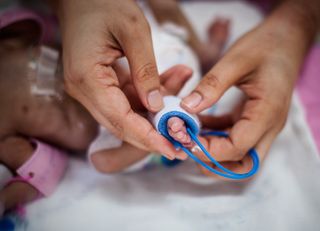 "It was the best of times, it was the worst of times" is a familiar quote from the opening of Charles Dickens' "A Tale of Two Cities," but the phrase is also applicable to the specialty drug market in the United States today.

Specialty drugs, usually complex biologic products created by genetic alterations of living tissues or organisms, have revolutionized patient care by creating human proteins, enzymes and antibodies that can treat diseases much more specifically than previously. These breakthroughs have come through a collective national choice to let drugmakers set prices and reap the profits with limited oversight – as opposed to many other countries with strict controls.

However, this choice has come at a steep price: Health care costs are soaring at an unsustainable pace, putting the finances of states, the federal government, companies and millions of Americans at risk.

Every American – especially our lawmakers preparing to remold our health care system for the second time in eight years – needs to understand the choice we have made and grapple with where to go from here. In the end, it comes down to one difficult question: What value should we place on a human life?

Drug costs are crippling us financially

But it will be impossible to control these spiraling costs without getting a handle on prescription drug spending, which is growing at a rate at least three times faster than every other major medical category.

What many people don't know is that spending on traditional drugs such as statins, acid controllers and antibiotics hasn't changed much. It's specialty and biologic drugs that are really taking a toll. Such drugs have been responsible for 73 percent of spending growth over the past five years.

A single prescription for one of the top five specialty drugs, for example, cost $6,621 in 2015, compared with $60 for traditional drugs like Nexium and Crestor. The situation for so-called orphan drugs, which are specialty biologic drugs used for rare diseases, is even worse. The average orphan drug cost $111,820 per person per year in 2014.

Specialty drugs are godsends for patients

So the obvious question is, are the costs worth it? And the answer is – for those whose lives are affected – clearly yes.

Specialty drugs can do amazing things, especially in the realm of rare diseases (those that afflict fewer than 200,000 patients) in which there had been no serious research in the past. The term orphan drug was codified in 1983 to describe medications intended to treat diseases so rare that pharmaceutical companies are reluctant to develop them.

That changed with the passage of the Orphan Drug Act of 1983, which allowed special grants for research, a 50 percent tax credit on trial costs, shorter FDA approval times and a guaranteed seven years of patent exclusivity. Before the act, the FDA approved 34 drugs that would have qualified as orphan drugs from 1967 to 1983. The FDA approved 10 times as many – 347 – over the next 26 years, reflecting how the act helped provide the financial incentive to produce these specialty drugs.

Let's look at just one rare disease, Liposomal Acid Deficiency. Also known as Wolman's Disease, it affects only a handful of infants, but without this vital enzyme they accumulate fats in their digestive organs, leading to organ swelling, failure and death within the first year of life.

Before 2015, there were no treatments, but now chickens are genetically modified so that their eggs produce this human enzyme, sold under the name sebelipase alpha. Injecting this enzyme clears up patients' debilitating symptoms and prolongs their lives, in some cases for as long as decades, experts believe.

Make no mistake, this is a miracle for parents of a baby with this terrible infliction. But this miracle is expected to cost about $700,000 a year for the rest of the child's life.

Things work a lot differently in Europe, and it's worth considering whether we'd be wise to follow its general approach.

Unlike in the U.S., countries in Europe have some form of socialized health care system in which the government covers the costs of drugs that meet certain criteria. That decision is made at the national level, while the European Medicine Agency determines whether to approve the drug for use.

Drugs are generally covered if the cost relative to benefits – known as a quality adjusted life year (QALY) – is under a certain threshold. Simply put, an extra year of life lived in perfect health is worth 1 QALY, while a sliding scale is used to quantify the value of an extra year in poor health (between 0 and 1 QALY).

In Britain, for example, medications are usually covered if each QALY gained costs less than £30,000 ($36,600) – although they do have some exceptions.

That means that few orphan drugs get reimbursed. Of the 116 orphan drugs the FDA approved for use outside of the hospital from 1983 to 2012, the U.K.‘s National Health Service didn't even review about two-thirds of them for reimbursement, presumably because the cost was too high. Of the rest, it offered conditional reimbursement for a dozen, while 15 were denied.

In an assessment of orphan drugs that cost more than $225,000 per year per patient in the U.S., none of these drugs had been reviewed in Britain.

So what should we do?

The U.S. has created market incentives to study rare diseases, and with the help of human ingenuity we have created some amazing breakthroughs in solving complex problems.

This mentality has been radically different from in Europe, where similar research never would have gotten off the ground because policymakers efficiently target their health care dollars for maximum impact on society – not for creating miracles for unfortunate outliers with rare diseases.

However, the inherent generosity built into the Orphan Drug Act is one factor leading so many Americans to struggle to afford their premiums and move into high-deductible plans that make a simple visit to the doctor effectively unaffordable. And employers as well as state and federal governments are being financially crushed under increasing health care costs.

So what can be done? Unfortunately, there are no easy answers, and every potential solution has costly or even life-and-death consequences.

The debate shouldn't be simply about what we can do to control costs but rather how much are we willing to spend to sustainably encourage new medical breakthroughs. I believe that we will need to apply a cost-effectiveness analysis to new and existing drugs and determine that at some point the costs outweigh the benefits.

Drawing that line – which comes down to defining how much a human life is worth – has been difficult for lawmakers, which is why the legislation underpinning the Affordable Care Act and its possible replacements have not addressed effective ways to control prescription drug spending.

But not choosing simply pushes the burden on those individuals, companies and taxpayers who fund health care. That burden is immense and will only continue to grow.

C. Michael White, Professor and Head of the Department of Pharmacy Practice, University of Connecticut