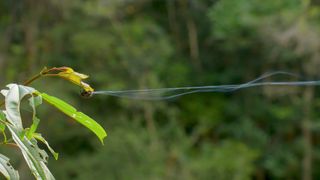 The tiny Darwin's bark spider can shoot its web a distance of 82 feet (25 meters).
(Image: © BBC/YouTube)

The amazing abilities of the Darwin's bark spider are on high-definition display in a video that shows this tiny spider wafting more than 80 feet (25 meters) of webbing across a river.

BBC Earth re-released the video this week. It comes from the 2015 program "The Hunt," which focused on predators. And the Darwin's bark spider is a champion predator: It spins silk tougher than Kevlar and builds webs that dwarf many adult men in size.

Darwin's bark spiders (Caerostris darwini) were discovered only in 2009. They live in Madagascar, where they spin giant orb webs — picture the classic round spider's web — over rivers, lakes and creeks. Webs regularly span more than 6.5 feet (2 m) in diameter, and the largest ever measured covered a whopping 30 square feet (2.8 square m), researchers reported in the Journal of Arachnology in 2010. The spiders spin initial connecting threads that are up to 82 feet (25 m) long to suspend these webs from vegetation on either side of a river or other body of water. The arachnids do this even though females are a mere inch (20 millimeters) long and males only a quarter-inch (6 mm) in length. [Check Out Images of the Largest Puppy-Sized Spider]

Researchers aren't yet sure whether Darwin's bark spiders have any specialized anatomy that makes them able to spin such long strands of silk. But the spiders might actually make their webs without needing much more silk than other orb-web weavers, said Todd Blackledge, a biologist at the University of Akron who researches spider silk. The threads on a Darwin's bark spider web are spaced relatively far apart, Blackledge said, and the spiders reuse their long "bridge" threads day after day, adding new webbing to them rather than starting from scratch.

"It's a big web, but it doesn't have as much extra length of silk in it as you might think," Blackledge told Live Science.

According to the same study, these massive webs enable the spider residents to capture huge amounts of prey in one go. The scientists observed 32 mayflies captured in one orb-spider's web in a single day.

The BBC video shows the process of building one of these massive webs, from the first spin of the "bridge" silk across a muddy river. A competing spider attempts to hijack the strand for its own web, so the original spider rushes to snip the line. She then reels in that silk to eat for a later meal and sets about her task again. Her reward? At least one mayfly, wrapped up in silk to eat later.

This spider's webbing is remarkably tough. Another 2010 study by the spiders' discoverers found that the arachnids' silk is twice as elastic as that of other orb-web-weaving spider species. The silk was more than 10 times as strong as Kevlar, the material in bulletproof vests, as measured by the amount of strain the silk could handle before breaking.

"Spider silk, in general, hits this magic sweet spot of being both strong and stretchy," Blackledge said. "And in the case of the Darwin's bark spiders, they seem to have increased the toughness of their silk by making it much more extensible, without sacrificing the strength of their thread."

Darwin's bark spiders are a fascinating species for other reasons, too. For one, they engage in oral sex. Male spiders orally stimulate females' genitalia before, during and after mating, found a study published in 2016 in the journal Scientific Reports. It appears that the spiders do this to signal their fitness, and perhaps because their saliva contains enzymes that might boost fertilization or prevent other males' sperm from competing, should the female mate again.

Male Darwin's bark spiders are also known to restrain their mates with silk and to leave behind blockages called genital plugs after ejaculating to keep competitor's sperm out, the researchers of the 2016 study reported.

Editor's Note: This article was updated with new information from a spider-silk researcher.