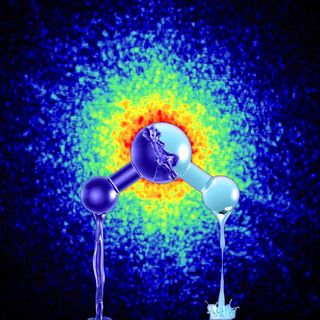 The findings add to the anomalous properties of this ubiquitous, life-giving liquid, which is like no other on Earth.

"The new remarkable property is that we find that water can exist as two different liquids at low temperatures where ice crystallization is slow," Anders Nilsson, a chemical physicist at Stockholm University in Sweden, said in a statement. [The Mysterious Physics of 7 Everyday Things]

Water is essential for life (at least on Earth). And wherever liquid water exists — whether it's in icebound lakes or scalding hydrothermal vents — tiny microbes have been found. That is why scientists have been excited by the possibility of salty water flows and other evidence of ancient water on Mars — it means there may well have been life early on in the Red Planet's history.

It turns out that water has strange physical properties found in no other liquids known to scientists. For one, it can exist in all three phases at Earth-like temperatures and pressures. For another, its molecular configuration — two hydrogens mated to an oxygen molecule — creates strong polarity, or a highly positively charged region and a highly negatively charged region. That, in turn, allows almost any substance to be dissolved in it; in that way, substances such as calcium ions can travel (dissolved) within water into and out of a cell, for instance, Brian Glazer, an oceanographer at the University of Hawaii at Manoa, who has studied astrobiology, previously told Live Science. Already, scientists have identified 70 properties of liquid water that differ from other liquid substances.

Researchers have long known that ice can exist in two solid forms: a highly ordered, crystalline form with individual molecules neatly lined up in a repeating pattern, and an amorphous version, where the molecules are scattered more haphazardly. In fact, this amorphous ice is the most abundant type on our planet, and can transform between both a low- and high-density version.

Scientists wondered whether a similar transition may occur in liquid water. To find out, Nilsson and his colleagues used X-rays to track the distance between individual molecules of H20 at low temperatures. Using this technique, they watched as the water transitioned from an amorphous, glassy, frozen liquid state (essentially, uncrystallized ice), to a viscous liquid, and then almost immediately to another, more viscous liquid with a lower density, the researchers reported today (June 26) in the journal Proceedings of the National Academy of Sciences.

The findings shed new light on the bizarre behavior of liquid water.

"The new results give very strong support to a picture where water at room temperature can't decide in which of the two forms it should be, high or low density, which results in local fluctuations between the two," study co-author Lars G.M. Pettersson, a theoretical chemical physicist at Stockholm University, said in the statement. "In a nutshell: Water is not a complicated liquid, but two simple liquids with a complicated relationship."