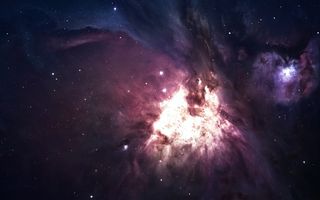 The Large Hadron Collider could help to solve some of the universe's deepest mysteries, such as how it came into existence.
(Image: © Vadim Sadovski/Shutterstock)

Don Lincoln is a senior scientist at the U.S. Department of Energy's Fermilab, America's largest Large Hadron Collider research institution. He also writes about science for the public, including "The Large Hadron Collider: The Extraordinary Story of the Higgs Boson and Other Things That Will Blow Your Mind" (Johns Hopkins University Press, 2014). You can follow him onFacebook. Lincoln contributed this article to Live Science's Expert Voices: Op-Ed & Insights.

Deep beneath the Swiss and French countrysides, a giant is awakening. No, this isn't the beginnings of this summer's latest blockbuster movie. The awakening is very real, if perhaps a bit metaphorical.

The Large Hadron Collider (LHC), located at the CERN (European Organization for Nuclear Research) laboratory just outside Geneva, is an enormous particle accelerator. It is the largest scientific facility ever constructed by humanity, with a circumference of more than 16 miles (27 kilometers). And after being shut down for about half a year, it resumed operations in May with significantly improved capabilities. [Photos: The World's Largest Atom Smasher (LHC)]

The LHC is most famous for its measurements that led to the 2012 discovery of the Higgs boson particle, the last missing piece of the Standard Model of particle physics. The Higgs boson, along with the associated Higgs field, is the origin of the mass of all subatomic fundamental particles. Its discovery was a scientific triumph that took nearly half a century to accomplish. Indeed, after its discovery, in 2013, two scientists who predicted the Higgs boson's existence won the Nobel Prize in physics.

But with that success under its belt, why is the LHC still operating?

The search for the Higgs boson was not the only reason this facility was built. More broadly, the LHC was built to study deep scientific questions. For example, why are the laws of nature the way they are? How did the universe come into existence? And does the universe have to be the way it is?

These aren't new questions. After all, we find musings about these same questions in some of our most ancient writings, whether it be in the Bible (e.g. Ecclesiastes 12:13) or the Hindu Katha Upanishad . What's changed in the past century, however, is that the scientific method can now definitively answer some questions.

The Standard Model is the name for our modern understanding of matter. Using two classes of subatomic particles (called quarks and leptons) and three subatomic forces (strong force, weak force and electromagnetic force), scientists can use the Standard Model to weave together an explanation for the tapestry of much of the cosmos.

But the Standard Model doesn't answer everything. For instance, we don't know answers to simple questions such as, why are there two classes of subatomic particles, and why are there three forces? Is there a deeper and more fundamental principle that unifies these pieces?

Even though we can't directly see dark matter, we see its effect because galaxies rotate more quickly than can be explained given the laws of gravity and the observed matter.  The evidence for dark energy is more obscure, but still compelling. The expansion of the universe is speeding up. Ordinary gravity says it should slow down and a repulsive form of gravity is needed to explain the accelerating expansion. The name for that repulsive gravity is dark energy. There is still much to learn about the nature of dark energy. [18 Biggest Unsolved Mysteries in Physics]

In the future, the LHC could possibly make dark matter in the laboratory. The LHC accelerates two beams of protons to unprecedented energies and smashes them together. Using Albert Einstein's famous equation showing that energy is mass, E = mc^2, scientists hope to convert the enormous amount of energy that's released during collisions into matter — dark matter, that is.

The LHC can also re-create the conditions that were present in the universe shortly after the Big Bang. When beams of protons collide, temperatures inside the collider shoot up to 100,000 times hotter than the center of the sun, re-creating the conditions less than a trillionth of a second after the universe began. Essentially, the LHC has allowed physicists to create the Big Bang in the laboratory, to better understand the rules of the universe that allow us to exist at all.

Even more broadly, the LHC is an instrumentation of intellectual exploration. It generates conditions never before seen by humanity. My colleagues and I already have gobs of data from previous runs of the machine. Now, we need only dig through that data, hoping for discoveries and surprises that will divulge a few more of nature's secrets.

In essence, although the LHC has been an astounding success thus far — it's generated more than 1,000 scientific papers — it's really just getting started. By the end of 2018, it will have delivered only about 3 percent of the data it is expected to produce over its lifetime.

We cannot possibly know what discoveries lie before us. After all, if we knew what the answer was going to be, it wouldn't be called research. But we can be completely certain that the journey will be fascinating, and we can hope that this amazing scientific work, performed by scientists from across the globe, will reveal answers to some of the universe's deepest mysteries.  And, stepping back and remembering the ultimate goal, eventually, and digging deeply enough, we’ll finally figure out why anything exists at all.