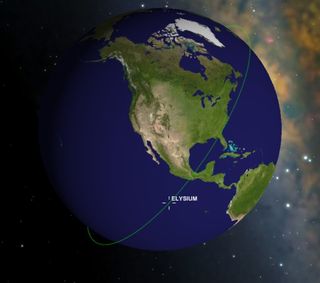 A free mobile app will allow anyone to follow the track of the spacecraft holding the human remains, a trek that is expected to last two years.
(Image: © Elysium Space)

If a celestial memorial seems fitting for a deceased loved one, you may consider sending their ashes into the heavens aboard a SpaceX Falcon 9 rocket.

The memorial spaceflight startup Elysium Space announced this week that a nanosatellite carrying human ashes, a mission called Elysium Star II, will be part of Spaceflight Industry's rideshare mission called SSO-A. That spacecraft, which will be carrying several payloads, will launch aboard a SpaceX Falcon 9 rocket from Vandenberg Air Force Base in California next year.

To date, 100 people have reserved spots — starting at $2,490 — for their loved ones' remains to fly aboard the Elysium Star II mission. This will be Elysium's second attempt to send cremated remains into orbit. In 2015, the startup sent a cubesat with human ashes aboard the U.S. Air Force Super Strypi rocket, which broke apart about a minute after liftoff from a facility in Kauai, Hawaii. [After Death: 8 Burial Alternatives That Are Going Mainstream]

Here's how the mission will work: Once a person signs up for the memorial, they will receive a capsule, into which they will scoop a portion of the cremated remains, according to Elysium Space. Once Elysium receives the capsule in the mail, they will transfer it to a compartment within one of the spacecraft's modules.

"In addition to the capsule, an engraved message of your choice, up to 80 characters, will be carried by the memorial spacecraft to the stars," Elysium said on their website.

"The Elysium memorial spacecraft will be deployed in a sun-synchronous orbit at about 500 kilometers [310 miles], ensuring it will pass over every location in the world during its journey among the stars, which will last about 2 years before reentering the atmosphere as a shooting star," Thomas Civeit, founder and CEO of Elysium, told Live Science in an email.

An object in a sun-synchronous orbit passes over Earth's equator at the same local time every day, according to NASA.

A free mobile app compatible with iOS and Android will show the location of the spacecraft in real time. In addition, the spacecraft's shiny exterior will reflect the sun's light, meaning Earthlings may be able to see it through binoculars, or even the naked eye, in the night sky, according to Elysium.

As the spacecraft orbits Earth, atmospheric drag will pull it closer to the planet, meaning it should be easier to view toward the end of its heavenly journey.

"As the spacecraft altitude will be decreasing over about 2 years, the increasing heat will burn the spacecraft on Earth's atmosphere reentry, blazing as a shooting star in the sky," Civeit said. "The spacecraft will completely vaporize during the reentry."

Where will it descend during this reentry?

"The exact location of the reentry will only be known a few days before, as it depends on the solar activity, which cannot accurately be predicted for a period of 2 years," Civeit said.

Elysium Space is also taking reservations for a lunar memorial mission — a pricier alternative that starts at $9,950 per slot, according to the company.