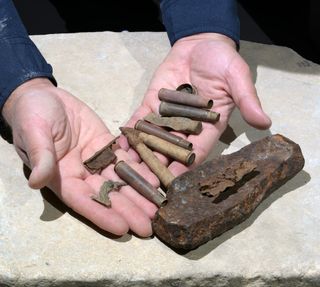 Cartridges, shells and bullets from the 1918 Battle of Megiddo were recently unearthed by accident by students excavating in a national park near Rosh Ha'ayin, Israel. The battle was fought by Turkish and British forces.
(Image: © Clara Amit, Israel Antiquities Authority)

Archaeologists looking for ancient relics in Israel inadvertently found more modern pieces of history: artifacts from an epic World War I battle between the Ottoman and British forces.

The artifacts were found at Rosh Ha'Ayin, which is near the ancient biblical fortress of Antipatris. Herod the Great built the fortress, apparently naming the city in honor of his father, Antipater. Volunteer archaeologists found rifle cartridges, shrapnel from artillery shells and even an insignia from the British forces' unit.

"As archaeologists, we expect to discover ancient finds from hundreds and thousands of years ago, whereas here, we have a relatively 'young,' 100-year-old artifact, but we were all drawn to the fascinating story of the battle," Yossi Elisha, director of the excavation on behalf of the Israel Antiquities Authority, said in a statement. [10 Epic Battles That Changed History]

The area where the artifacts were uncovered is part of Migdal Tzedek National Park. Along with the Herodian fortress of Antipatris, the larger region also holds the ancient ruins from a Medieval crusader castle.

The artifacts were discovered completely by accident. Archaeologists from the Israel Antiquities Authority, along with student volunteers, were helping conduct excavations in advance of paving a road between two areas near Rosh Ha'Ayin when a student came upon one of the rifle cartridges.

After further excavation, the team found bullets, Ottoman rifle cartridges, numerous fragments of artillery shells and part of a British army cap bearing an insignia. The team also discovered the remains of two Ottoman military outposts, one near an agricultural field and another near an older tower.

The British and the Ottoman forces faced off in a major skirmish on Sept. 19, 1918, part of the larger Battle of Megiddo. At the time, the British were vying for control of Israel (then called Palestine), which was occupied by the Ottomans.

"Two battalions, one-fourth and one-fifth of the British Norfolk Regiment, attacked the ridge where the excavated site is located, in order to assist another battalion that attacked the Ottoman fortifications," Assaf Peretz, a researcher at the Israel Antiquities Authority, said in the statement. "Finding the British cap insignia inside the Ottoman outpost vividly illustrates the historical event."

The artifacts also enabled the team to reconstruct the battle. For instance, based on the artillery shells and shrapnel balls found at the site, Israel Antiquities Authority weapons expert Alexander Glick concluded that the British attacked the Turkish forces with 18-pounder guns. Bullet cartridges from Mauser rifles were found on the Turkish side, suggesting that the Turks returned fire with light arms. The Turkish forces sustained casualties, but still managed return fire, Glick said.

"The rifles and cartridges were manufactured in Germany and were supplied shortly before the battle, evidence that the Turks were dependent upon their German allies for weapons and ammunition," Glick said in the statement.