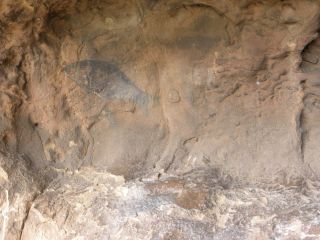 One of the fish from the site with 5,000-year-old rock art in the Thune Valley, Botswana.
(Image: © David Pearce)

They may now be underwater, but the oldest rock art paintings in southern Africa are about 5,000 years old, far more ancient than previously realized, a new study finds.

Researchers were able to grab fragments of the ancient artwork — which includes scenes of fish and human figures drawn on the walls of a naturally occurring rock shelter— before a newly constructed dam in Botswana unleashed a torrent of water over it, they said.

The researchers then used a novel technique to isolate the paint fragments before dating them, as well as 13 other fragments from rock art sites across southern Africa, including in Lesotho and South Africa. [See Photos of Ancient Rock Art from Botswana and other Southern African Countries]

The new method "has given us the first really solid dates for the antiquity of surviving rock shelter art in southern Africa," said lead study researcher Adelphine Bonneau, a postdoctoral researcher of archaeology at Lux Laboratory at the University of Québec in Montréal.

The project has taken Bonneau and her colleagues more than seven years to complete. She got involved in 2010, when she happened across study co-researcher David Pearce, an associate professor at the University of the Witwatersrand's Rock Art Research Institute in South Africa.

Pearce had collected several dozen rock flakes that were covered with paint. These flakes, Bonneau soon learned, had crumbled away from ancient rock art created by the San people in southern Africa, and fallen to the ground. Archaeologists had tried, in vain, to reattach them to the cave art images. When that didn't work, Pearce decided to use the fragments to date the rock art.

The San (or bushmen) are native to southern Africa, and have some of the best-understood rock art traditions in the world, Bonneau said. However, the paint recipes and the ages of these paintings were less well-known, she said.

Pearce gave the project to Bonneau, and asked her to finish it in six months. She developed a method and dated three of the flakes within that time, but the project was so large she turned it into a doctoral thesis. Since then, she has collected samples from 60 sites, and dated 14 of them.

Dating rock art can be challenging. It requires removing a chip of the paint — in effect, partly destroying the art — and requires the original carbon from the painting for radiocarbon dating (sometimes, there is no carbon and other times there is contamination from the carbon of other objects).

Moreover, the great outdoors — wind, rain, erosion and pollution, as well as plant, animal and human interference ― can harm rock art, making whatever is left difficult to date. In one case, Bonneau saw a sheep licking one of the ancient paintings on a rock wall in South Africa.

Because of these factors (the sheep included), "A lot of paintings aren't really well-preserved," and can be difficult to date, Bonneau said. So, the researchers developed a protocol that identified all of the sources of carbon within each painting, removed the carbons unrelated to the painting, and then dated the painting's original carbon. Furthermore, they did all of this with as small a specimen as possible, so that they wouldn't significantly alter the ancient artwork. [In Photos: Ancient Rock Art Found in Jordan's 'Black Desert']

Their results showed that the San people painted with three materials: charcoal, soot and carbon black (a mixture made of burnt fat), and the latter two provided reliable dates of when the paintings were made. For instance, the dates from the Thune Dam in Botswana ranged from about 5,000 to 2,000 years ago; at the Metolong Dam in Lesotho, the artwork ranged from about 1,500 to 150 years ago; and in South Africa's Maclear District, the rock painting dates ranged from 2,500 to 150 years ago.

The tests showed that some rock shelters were used for several centuries, even millennia, Bonneau said.

"For the first time, it is possible to understand how the paintings on a shelter were created," she said. It shows "when and where the artists started to paint in the shelter [and] for how long it was used. It opens up the possibility to discuss why some shelters were used for long periods and whereas other ones seem to have only one phase of paintings."

Bonneau plans to use the newfound method on future rock art sites, and encouraged others to use it, too.

The new methodology and findings are "a great step forward," said Emmanuelle Honoré, a research fellow at the McDonald Institute for Archaeological Research at the University of Cambridge in the United Kingdom, who was not involved in the study.

The oldest cave art on record isn't in Africa — one site in Indonesia dates to 40,000 years ago — but perhaps the new method will reveal other ancient rock art around the world, Honoré said.

The study was published in the April issue of the journal Antiquity.