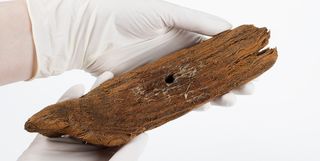 A hole in the middle of this carved toy boat may have been bored to hold a mast and a sail.
(Image: © Åge Hojem/NTNU University Museum)

A wooden toy discovered during an excavation of an Iron Age site in central Norway hints that 1,000 years ago, a child may have imagined ferocious Viking battles by playing with a carved replica of a ship.

Found buried in a dry well at a small farm in the town of Ørland on the coastal tundra, the boat is whittled in a style resembling Viking vessels, with an uplifted prow and a hole in the center that likely held a mast for a sail.

The Viking Age, dating from around A.D. 800 to 1066, marked a time when Scandinavian sailors and explorers voyaged to Europe's coastal regions and as far as Bahdad, and their distinctive sailing vessels were well-known — apparently, even by inland farmers, who carved replicas of their boats for children. [Fierce Fighters: 7 Secrets of Viking Culture]

"This toy boat says something about the people who lived here," Ulf Fransson, a field leader for the dig and an archaeologist at the Norwegian University of Science and Technology (NTNU) University Museum, said in a statement.

Not only does the wooden toy indicate that a child — or children — lived on the farm, it suggests what that child's lifestyle may have been like, Fransson said.

"It also shows that the children at this farm could play, that they had permission to do something other than work in the fields or help around the farm," he said.

Also found in the well — and in another well nearby — were leather pieces from shoes, dating to approximately A.D. 1015 to 1028. Seven farms and farmyards at least 1,500 years old have been uncovered at the site, and archaeologists are piecing together what these clustered homesteads might reveal about community life during the Middle Ages, according to Ingrid Ystgaard, an archaeologist at the NTNU University Museum and project manager of the dig.

"This is one of the biggest questions we are studying, the development of farms in this area over a span of 1,500 years in the past. It is fantastic material," Ystgaard said in the statement.

Located far from the ocean, the farm where the toy boat was found was not near any large trade routes or cities, and was likely not one of the most prosperous farms in the region, Ystgaard said.

Nevertheless, life on the farm provided enough leisure time for an adult to carve a child's toy, and for a child to play with that toy, according to Fransson.

The fragile toy boat was probably so well-preserved because of the high water table in the well where it was found — in a drier location, it would probably have decomposed, the archaeologists said in the statement.

Though Vikings were long regarded as pillagers and raiders of coastal villages, recent discoveries have challenged that idea. A study published December 2014 in the journal Philosophical Transactions of the Royal Society B suggested that Vikings embarked on seafaring voyages to establish colonies and trade routes — and that women sailed on the Viking ships as well.

Perhaps that idea resonated with a young Norwegian farm girl playing on the tundra 1,000 years ago, as she wielded her toy Viking boat and dreamed about sailing the open sea.