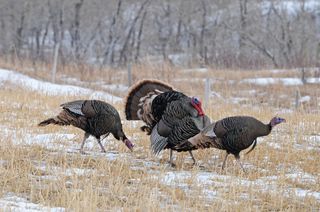 Turkeys generally stay in flocks, with one bird typically being a leader.
(Image: © Todd Boland/Shutterstock)

A bizarre video of a flock of turkeys circling a dead cat in a Boston neighborhood recently went viral.

Was it an avian séance? A strange mourning (or jubilation) ritual? The turkey version of a circle folk dance?

Actually, the behavior is much more ordinary.

Although it looks incredibly strange to human eyes, the behavior is typical for the wild birds, Mark Hatfield, a wildlife biologist for the National Wild Turkey Federation (NWTF) in Georgia, said in a blog post.

"They're just making sure that it's no longer a threat," Hatfield said. "It's more of a curiosity type of thing. Turkeys are very basic." [The 12 Weirdest Animal Discoveries]

Turkeys have a flock mentality, with one bird typically being a leader, said Pete Muller, the public relations manager for NWTF. When anything resembling a predator shows up in their midst, they have an instinct to follow their natural pecking order, which, in this case, means playing a wary game of follow-the-leader.

"They're saying 'That's a threat, I'm gonna keep my distance and I'm following the flock,'" Hatfield wrote in the blog post.

For instance, Hatfield once saw a mother turkey hen leading her chicks in a tentative circle around a timber rattlesnake coiled up on the ground in the center, Muller said. The turkeys did one full circle before departing.

But why circle the cat, instead of completely steering clear of it? If there really is a risk that the feline was playing dead, it would presumably be safer to skedaddle.

"If the cat moved at all, there would be an immediate flock scatter," Muller told Live Science. Turkeys are fast, too: They can hit top running speeds of 25 mph (40 km/h), according to the National Wildlife Federation.

Though seeing a huge flock of turkeys in a neighborhood setting may seem unusual, turkeys tend to travel in flocks; several mother hens and their chicks team up to form broods, with groups sometimes reaching 200 birds, according to the Cornell Lab of Ornithology. Males, who have no part in raising chicks, often formseparate groups, according to the website.