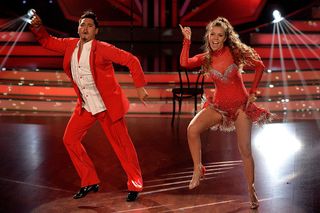 How would scientists rate these dance moves? Victoria Swarovski and Erich Klann perform during a Let's Dance" episode on May 20, 2016 in Cologne, Germany.
(Image: © Sascha Steinbach/Getty Images)

From Shakira to Travolta, some people just know how to shake it on the dance floor. What's their secret? A study published in Scientific Reportsthis week has identified some of the common body movements that seem to characterize the best female dancers, in a social setting at least: hip swings, plus some coordinated asymmetry in the arms and legs. The study's authors also offer up some theories about why these particular moves get dancing queens noticed. Hint: It's about sex.

Nick Neave, an associate professor of psychology at Northumbria University in the United Kingdom, and his colleagues launched this study as a follow-up to an earlier experiment. In 2011, they examined which male dance moves proved most attractive to the opposite sex. It turned out that women favored men who varied their neck and torso movements when they danced.  (Forget the monotonous head bob, boys.) The women also took note of the speed at which male dancers moved and flexed the right knee.

This time around Neave and team asked 39 young women, ages 18 to 30, to dance to a drum pulsing at 125 beats per minute, which they stripped from a Robbie Williams pop song. None of the subjects was a professional dancer. "We said pretend you're in a nightclub, this track comes on—just dance as you would if you were completely happy and chilled out," Neave explained.

The researchers used motion-capture technology to record the dancers, and then turned them into identical on-screen avatars with noticeably female figures but no other identifying traits. They asked 200 crowdsourced viewers—57 men and 143 women—to rate the dancers on a seven-point scale from extremely bad to extremely good. And as it turned out, the best dancers all had certain moves in common.

For one thing, they swung their hips more than the lower-rated dancers did. This finding probably isn't so surprising to anyone who's watched people dance, and evolutionary psychology explains why: sex and dance are closely linked. Dancing in a social setting is commonly viewed as a courtship ritual. Some research, Neave notes, has shown that men find women's body movements more alluring when the women are ovulating. Swaying hips, therefore, may help to signal a woman's fitness—and even her fertility—to a potential mate. From an evolutionary standpoint, dancing women are "showing off femininity with hip movements," Neave says. "They're also showing off to other females what good quality they are."

The top dancers also seemed to throw more pleasing shapes, striking a balance of asymmetrical arm and thigh movements. "If all the limbs are moving in exactly the same way, it looks very robotic and very odd," Neave says. "And if people's movements are very asymmetric—one arm doing something completely different than the other arm—again, that looks quite weird." The team discovered that there was an optimal level of asymmetry, which they think may have something to do with showing off finely-tuned motor skills to a potential mate.

Frank Pollick, a psychology professor at the University of Glasgow who has studied human movement, often in the context of dance, points out that these telltale movements may come as a package. "The whole body is going to move if you move the hips," he says. Pollick speculates that motion may flow differently through the body when a dancer is more relaxed. "That would be a nice direction to take this research further," he adds.

There's no doubt that self confidence has a lot to do with dancing ability, Neave says. The worst-rated dancers among his subjects looked noticeably more shy and uncomfortable. By measuring what makes dancing good, Neave hopes that they can pinpoint the biological factors that may underlie self-confidence, as well as other attributes that make for a talented dancer. In their earlier study, for example, it turned out that a man's physical strength predicted his perceived dancing abilities, although cause and effect remain unclear.

Using this same methodology, Neave says researchers can investigate whether dancing ability in both sexes correlates with motor control or fertility, for example. He also wants to look at how people in different cultures or with a different sexual orientation perceive what are the "best" dance moves. All of the dancers in the current experiment were heterosexual university students living in northeast England. "What we've tried to do is start to pin down the scientific basis of what makes movements attractive or not, and I think we've now got that" he says. "We can then go on to ask these much more tricky questions."