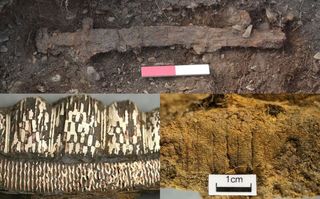 Archaeologists found several grave goods within the Viking burial, including a sword (top), the remains of fabric that was wrapped around the blade of the sword (lower right) and the decoration on the pommel of the sword (bottom left).
(Image: © Pieta Greaves/AOC Archaeology)

About 1,000 years ago, Vikings dug a grave for a "warrior of high status" and buried him in a boat that was overflowing with grave goods, including a hefty sword and a broad-bladed ax, according to a new study.

The Viking warrior was buried in western Scotland's Swordle Bay, far from his home in Scandinavia. But, the artifacts found in his grave are Scandinavian, Scottish and Irish in origin, the researchers found.

The rare finding provides insights into how the peoples of western Scotland lived and interacted during the 10th century, when this Viking was buried, the researchers said. [Images: Viking Jewelry Revealed in Sparkling Photos]

"The findings suggest a connection between Scandinavia and Ireland in the objects found, as well as information about the history of diet of the person buried here and their connections away from Swordle Bay," the study's lead researcher, Oliver Harris, an associate professor of archaeology at the University of Leicester, said in a statement.

Researchers discovered the grave in 2011 on Scotland's remote Ardnamurchan Peninsula. They were amazed to find that the individual was buried with warrior-related weapons, including an ax, sword, spear and shield. The scientists also found 213 of the boat's metal rivets, which survived while the wooden boat decayed over the years.

Other grave goods that were discovered in the burial relate to daily life, cooking, work, farming and food production, the researchers said. Moreover, the grave is close to a Neolithic burial cairn (a human-made stone mound), whose stones may have been incorporated into the Viking grave, the researchers said.

"The Ardnamurchan boat burial represents the first excavation of an intact Viking boat burial by archaeologists on the U.K. mainland, and provides a significant addition to our knowledge of burial practices from this period," Harris said.

The archaeological team also found a shield boss (the domed part of the shield that protected the warrior's hand); a whetstone made from a kind of rock that's found in Norway; and a single copper-alloy ringed pin, which was likely used to fasten a burial cloak or shroud.

In addition, the grave held the mineralized remains of textiles and wood.

"Critically, when considering a burial like this, it is essential to remember that each of these objects, and each of these actions, was never isolated, but rather they emerge out of, and help to form, an assemblage that knits together multiple places, people and moments in time," the researchers said in the statement.

An analysis of the isotopes in the man's teeth (an isotope is an element that has a different number of neutrons than normal in its nucleus) suggests that he grew up in Scandinavia, the researchers noted.

Other recent Viking discoveries include an immense ax buried with a Viking "power couple" in Denmark, and Viking graves with the bodies of beheaded slaves in Norway.

The study was published in the February issue of the journal Antiquity.