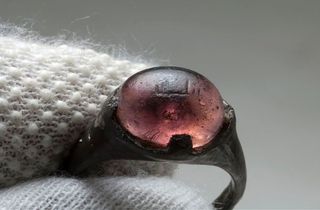 Ancient tales about Viking expeditions to Islamic countries had some elements of truth, according to recent analysis of a ring recovered from a 9th century Swedish grave.

Featuring a pink-violet colored stone with an inscription that reads “for Allah” or “to Allah,” the silver ring was found during the 1872-1895 excavations of grave fields at the Viking age trading center of Birka, some 15.5 miles west of Stockholm.

It was recovered from a rectangular wooden coffin along with jewelry, brooches and remains of clothes. Although the skeleton was completely decomposed, the objects indicated it was a female burial dating to about 850 A.D.

The ring was cataloged at the Swedish History Museum in Stockholm as a signet ring consisting of gilded silver set with an amethyst inscribed with the word “Allah” in Arabic Kufic writing.

The object attracted the attention of an international team of researchers led by biophysicist Sebastian Wärmländer of Stockholm University.

“It’s the only ring with an Arabic inscription found in Scandinavia. We have a few other Arabic-style rings, but without inscriptions,” Wärmländer told Discovery News.

“Our analysis shows that the studied ring consists of a high quality (94.5 percent) non-gilded silver alloy, set with a stone of colored soda-lime glass with an Arabic inscription reading some version of the word Allah,” Wärmländer and colleagues wrote in the journal Scanning.

Although the stone wasn’t an amethyst, as long presumed, it wasn’t necessarily a material of lower value.

A closer inspection revealed the glass was engraved with early Kufic characters, consistent with the grave at Birka dating to around 850 A.D.

The researchers interpreted the inscription as “il-la-lah,” meaning “For/To Allah.” Alternative interpretations of the engraving are possible, and the letters could also be read as “INs…LLH” meaning “Inshallah” (God-willing).

“Most likely, we will never know the exact meaning behind the inscription, or where and why it was done,” the researchers wrote.

“For the present investigation, it is enough to note that its Arabic-Islamic nature clearly links the ring and the stone to the cultural sphere of the Caliphate,” they added.

Most interestingly, Wärmländer and colleagues noted the ring body is in mint condition.

“On this ring the filing marks are still present on the metal surface. This shows the jewel has never been much used, and indicates that it did not have many owners,” Wärmländer said.

In other words, the ring did not accidentally end up in Birka after being traded or exchanged between many different people.

“Instead, it must have passed from the Islamic silversmith who made it to the woman buried at Birka with few, if any, owners in between,” Wärmländer said.

“Perhaps the woman herself was from the Islamic world, or perhaps a Swedish Viking got the ring, by trade or robbery, while visiting the Islamic Caliphate,” he added.

Either way, the ring constitutes evidence for direct interactions between the Vikings and the Islamic world, the researchers concluded.

“The Viking Sagas and Chronicles tell us of Viking expeditions to the Black and Caspian Seas, and beyond, but we don’t know what is fact and what is fiction in these stories,” Wärmländer said.

“The mint condition of the ring corroborates ancient tales about direct contacts between Viking Age Scandinavia and the Islamic world,” he said.