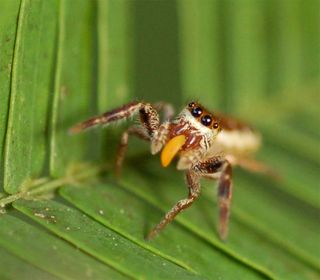 In a possible affront to its fierce meat-eating relatives, one jumping spider prefers to dine vegetarian, munching on specialized leaf-tips of acacia shrubs, finds a new study.

The eight-legged vegetarian, called Bagheera kiplingi, lives in Central America, and is now considered a rarity among the world's 40,000 or so spider species, most of which are strictly predators, feeding on insects and other animals. B. kiplingi is about the size of a person's pinky nail.

"This is really the first spider known to specifically 'hunt' plants; it is also the first known to go after plants as a primary food source," said study researcher Christopher Meehan of Villanova University in Pennsylvania. (Co-author Eric Olson of Brandeis University independently observed the same behaviors in another population of this spider in Costa Rica.)

Essentially, the spider employs hunting strategies to get past guard ants that keep the acacias safe from other herbivores. In return, the ants get a comfy place to live — the plant's hollow spines — and food in the form of acacia nectar and the shrub's leaf-tips.

B. kiplingi spends its entire life on the acacia shrubs, and so must avoid the ants at all times. When hunting, they actively avoid the ants by changing targets when approached by a guard, and using silk droplines as retreat ladders. The spiders also nest primarily on the ends of older acacia leaves, spots the researchers found were least patrolled by ants.

"Most of the big spider textbooks almost outright claimed there are no herbivorous spiders," Meehan told LiveScience. "It's on par with the flying pig in terms of novelty."

The strategy seems to be successful. Direct observation, video recordings and chemical analyses of such spiders in Mexico and Costa Rica suggest the animals get most of their food from such plants. In the Mexican population, about 90 percent of the spiders' diet came from plant tissue, with the rest made up of ant larvae, nectar and other items. In Costa Rica, the spiders got about 60 percent of their diet from acacia plant tissues.

When the spiders do hunt ant larvae, they mimic the ants' behaviors, for instance by making jerky movements.

The research will be published in the Oct. 13 issue of the journal Current Biology.