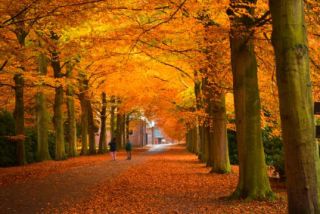 While leaves in the United States turn yellow, orange and red in the autumn, those in Europe only turn yellow.
(Image: © stockxpert)

The riot of color that erupts in forests every autumn looks different depending on which side of the ocean you're on.

While the fall foliage in North America and East Asia takes on a fiery red hue, perplexingly, autumn leaves in Europe are mostly yellow in color.

A team of researchers has a new idea as to why the autumnal colors differ between the continents, one that involved taking a step back 35 million years in time.

The green color of leaves during the spring and summer is a result of the presence of the pigment chlorophyll, which allows plants to capture sunlight and produce energy by the process of photosynthesis.

When the weather begins to turn cool in the fall, chlorophyll, which is sensitive to the cold, stops being produced. As the green fades, yellow and orange pigments called carotenoids (also responsible for the orange color of carrots) take over. These pigments were always present in the background of the leaves' color, but can finally shine through as the green diminishes.

While this process has long been known to scientists, the mechanism that results in red hues has proved trickier to understand, particularly because of the energy the tree must use to produce them at a time when the leaves are about to die anyway.

The red color comes from anthocyanins, which unlike carotenoids are produced only in the fall. These red pigments act as sunscreen for the trees by blocking out harmful radiation and preventing overexposure to light. They also act as an antifreeze, preventing leaf cells from freezing easily in the autumn chill.

Some scientists have even suggested that the red colors ward off pests that would munch on the leaves if they were a more appetizing-looking yellow. It's from this premise that scientists figured out what might be going on.

Until 35 million years ago, the idea goes, large areas of the globe were covered with evergreen jungles or forests composed of tropical trees, say Simcha Lev-Yadun of the University of Haifa-Oranim in Israel and Jarmo Holopainen of the University of Kuopio in Finland. During this phase, a series of ice ages and dry spells transpired, and many tree species evolved to become deciduous, dropping their leaves for winter.

Many of these trees also began an evolutionary process of producing red deciduous leaves in order to ward off insects, the researchers say.

In North America, as in East Asia, north-to-south mountain chains enabled plant and animal 'migration' to the south or north with the advance and retreat of the ice according to the climatic fluctuations. And, of course, along with them migrated their insect 'enemies' . Thus the war for survival continued there uninterrupted.

In Europe, on the other hand, the mountains – the Alps and their lateral branches – reach from east to west, and therefore no protected areas were created. Many tree species that did not survive the severe cold died, and with them the insects that depended on them for survival.

At the end of the repeated ice ages, most tree species that had survived in Europe had no need to cope with many of the insects that had become extinct, and therefore no longer had to expend efforts on producing red warning leaves.

To back up this theory, the researchers offer an example of the exception that proves the rule: Dwarf shrubs, which grow in Scandinavia, still color their leaves red in autumn.

Unlike trees, dwarf shrubs have managed to survive the ice ages under a layer of snow that covered them and protected them from the extreme conditions above. Under the blanket of snow, the insects that fed off the shrubs were also protected – so the battle with insects continued in these plants, making it necessary for them to color their leaves red, the thinking goes.