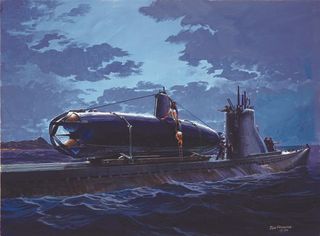 This Illustration shows the crew (Kazuo Sakamaki and Kiyoshi Inagaki) boarding the mini submarine HA-19, which sits on top of the larger "mother" submarine 1-24, during the early-morning hours of Dec. 7, 1941.
(Image: © Tom W. Freeman | courtesy of Valor in the Pacific National Historical Park)

During the predawn hours of Dec. 7, 1941, Japanese crewmembers boarded two mini submarines to take part in the surprise attack on Pearl Harbor. Now, 75 years later, the public can see an underwater live stream of these two historic submarines resting at the bottom of the Pacific, according to the National Oceanic and Atmospheric Administration (NOAA).

The two submarines may be corroded and covered with barnacles now, but 75 years ago they were in working condition. However, their operations were short-lived. One of the mini subs fired on the USS Ward, which then fired back, sinking it 90 minutes before the Japanese bombed Pearl Harbor by air, NOAA reported.

These shots marked the first time American forces fired on the enemy during World War II, NOAA reported. However, American personnel didn't immediately warn their counterparts on base of the intrusion, NOAA said.

The USS Ward survived the attack, but it didn't survive the war. Exactly three years after the Pearl Harbor attack, a kamikaze attack sank the ship in the Philippines on Dec. 7, 1944, according to NOAA.

The ROV live stream will also explore a second mini submarine — one that disappeared the morning of the attack. It was found in shallow waters in 1951, and later the U.S. Navy raised it and dumped it in deeper waters farther out to sea.

The University of Hawaii's Undersea Research Laboratory rediscovered it in 1992 and has periodically visited it with submersibles, the last time in 2013, NOAA said.

This Pearl Harbor anniversary will see another historic event: Japanese Prime Minister Shinzō Abe will visit the harbor with President Barack Obama in late December, making Abe the first Japanese leader to visit the site since the attack, according to Reuters.