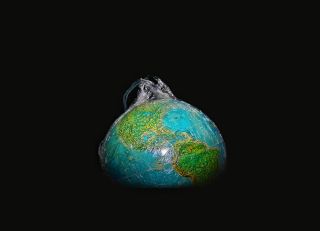 Humanity's imprint on the planet weighs in at trillions of tons.
(Image: © University of Leicester)

It's safe to say that humans have accumulated a lot of stuff over the years. Scientists recently discovered that all objects on Earth created by people adds up to an astoundingly large figure.

How large? According to a new study, the estimated mass of every bit of urban and rural infrastructure, every vehicle and machine, every device and construction on land, sea and in the air, every piece of technology, and all the garbage in landfills, is approximately 30 trillion tons.

All of these objects are collectively known as Earth's "technosphere." Distributed evenly over the planet's surface, the technosphere would translate into about 110 pounds (50 kilograms) for every 11 square feet (1 square meter), the researchers said. [Top 10 Ways to Destroy Earth]

"It is all of the structures that humans have constructed to keep them alive, in very large numbers now, on the planet: houses, factories, farms, mines, roads, airports and shipping ports, computer systems, together with its discarded waste," study co-author Jan Zalasiewicz, a professor of palaeobiology at the University of Leicester, in the United Kingdom, said in a statement.

"The technosphere is a system, with its own dynamics and energy flows – and humans have to help keep it going to survive," Zalasiewicz said.

The appearance of the technosphere is linked to a newly-described geological age called the Anthropocene — a period defined by humanity's reshaping of Earth — which extends from the 1950s to the present.

Unlike Earth's biosphere — the parts of the planet that sustain life — the technosphere does a poor job of recycling the materials that make it up. Instead of breaking down and refueling growth, elements of the technosphere simply take up more space in landfills.

"The technosphere may be geologically young, but it is evolving with furious speed, and it has already left a deep imprint on our planet," Zalasiewicz added.

The findings were published online Nov. 30, in the journal The Anthropocene Review.