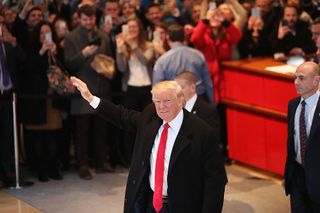 Is there reason to doubt climate change because some of the nation's hottest days happened in 1898, as President-elect Donald Trump told the New York Times in an interview yesterday?

In an exchange with Times publisher Arthur Sulzberger Jr. and staff about climate change on Tuesday (Nov. 22), Trump said, "I have an open mind to it," but later added, "You know the hottest day ever was in 1890-something, 98. You know, you can make lots of cases for different views."

However, it's misleading to single out a weather event — such as a particularly hot day in 1898 — as evidence for or against climate change, according to the National Oceanic and Atmospheric Administration's National Ocean Service (NOS). [The Reality of Climate Change: 10 Myths Busted]

"Weather is what you see outside on any particular day," the NOS reports. "So, for example, it may be 75 degrees and sunny or it could be 20 degrees with heavy snow."

In contrast, climate is an average of weather over time. "For example, you can expect snow in the Northeast in January, or for it to be hot and humid in the Southeast in July," the NOS said.

Extreme values, such as record rainfall or record high and low temperatures, are known as climate records because they stand out in a long period of time, the agency added.

In 1898, both Oregon and Maryland reached their highest temperatures on record: 119 degrees Fahrenheit (66 degrees Celsius) in Oregon and 109 F (60.5 C) in Maryland, according to The Weather Channel. But these record-hot temperatures are simply climate records in two states, not evidence for widespread climate change, according to experts.

Rather, looking at the climate for an extended period of time gives researchers a better idea about the direction the climate is heading. For instance, 2016 is expected to be the hottest year on record by a significant margin, with world temperatures an average of 2.2 F (1.2 C) above preindustrial levels, the World Meteorological Organization (WMO) said, as reported by Climate Central.

Ninety-seven percent of climate scientists agree that this rapid warming is not due to natural causes, but due primarily to the result of human activity, according to NASA.

These increasing temperatures are "consistent with our expectations for the response of the climate system to increases in greenhouse gases," Jennifer Francis, a research professor in the Department of Marine and Coastal Sciences at Rutgers University in New Jersey, told Live Science last week.

During the interview with Trump, Sulzberger also conflated a single weather event — Hurricane Sandy, which slammed the Caribbean and the East Coast of the United States in 2012 — with climate change, saying, "Well, since we're living on an island, sir, I want to thank you for having an open mind. We saw what these storms are now doing, right? We’ve seen it personally. Straight up."

For instance, warm oceans and moist air give strength to existing hurricanes, Kevin Trenberth, a distinguished senior scientist in the Climate Analysis Section at the National Center for Atmospheric Research, told Live Science.

Moreover, it's possible that future flood-causing surges from hurricanes and other storms will be more severe as climate change causes sea levels to rise, according to study published in October in the journal Proceedings of the National Academy of Sciences.