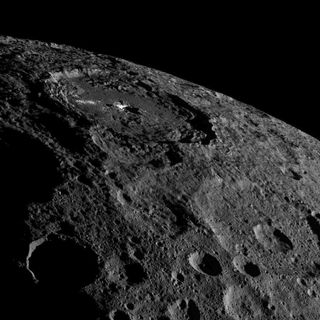 The strange bright spots of Occator Crater on the dwarf planet Ceres are unmistakable in this spectacular photo by NASA's Dawn spacecraft taken on Oct. 17, 2016 and released on Nov. 18 as Dawn moves into a higher orbit.
(Image: © NASA/JPL-Caltech/UCLA/MPS/DLR/IDA)

NASA's Dawn probe is snapping stunning new views of the dwarf planet Ceres as the spacecraft pushes ever higher above the small world.

In one image, Ceres' huge Occator Crater shows its central bright region, the brightest on Ceres. The crater itself is 57 miles wide (92 kilometers), and 2.5 miles deep (4 km). That makes it 77 times larger than the Barringer Crater in Arizona. Dawn took the picture when it was about 920 miles (1,480 km) above the surface, in early October. [Check out more amazing Ceres photos by Dawn]

Planetary scientists think the bright spots might be from briny material bubbling up during geologic activity; the liquid would sublimate away leaving the salts behind. Another asteroid slamming into Ceres could also cause upwelling, which is what some think happened at Occator Crater.

Scientists also released an image that gives an idea of what Ceres would look like if humans could see it with their own eyes, close up.

Dawn's new orbit will be 4,500 miles (7,242 km) from Ceres. NASA is sending the probe to higher altitudes where it can make additional measurements. For example, the spacecraft will use its gamma ray and neutron spectrometer to look at the cosmic rays that suffuse the space around the asteroid, to compare them with readings closer in. The background "noise" can then be separated from the signal, allowing more scrutiny of Ceres' composition.

Ceres started working its way to the new orbit on Nov. 4. While the primary mission was completed in July, NASA extended the mission as the probe was still functioning.

NASA's Dawn spacecraft launched in 2007 and first journeyed to Vesta, entering orbit in July 2011. In September 2012 it left orbit to go to Ceres, where it arrived in March 2015.