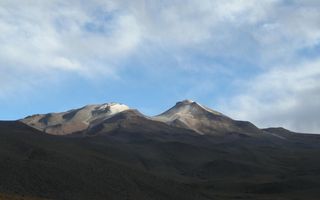 An enormous amount of water has been discovered locked up in molten rock beneath Cerro Uturuncu volcano in the Bolivian Altiplano.
(Image: © Jon Blundy - University of Bristol)

The Bolivian volcano Cerro Uturuncu is a massive barren peak rising from the high plateau of South America's Altiplano. If you've heard of the volcano, it may be because of recent news stories claiming that scientists have found a "lake" beneath its base, deep in the Earth's crust.

That's only partially true. There is no actual lake under Cerro Uturuncu — but there is an incredible amount of water locked up in the melted rock beneath the volcano, approximately enough to fill Lake Superior. This sort of dissolved water is a well-known driver of eruptions for volcanoes in subduction zones, where one piece of the Earth's crust is being pushed under another. Still, scientists were surprised at the sheer amount of water trapped beneath Cerro Uturuncu.

"It's probably about twice as much as would have been expected," said Jon Blundy, a petrologist at the University of Bristol in the U.K., who was involved in the new research that discovered the massive store of water. [See Stunning Photos of Volcano's Lava Lake]

Blundy and his colleagues were studying the volcano because satellite measurements revealed the ground around the mountain was deforming. That's typically a sign that the magma under the volcano is on the move in some form or another. As they took seismic measurements of the crust under the volcano, they found an "anomaly" about 9 miles (15 kilometers) down. There, the seismic waves slowed and the electrical conductivity shot up.

Using andesite, an igneous rock collected from the volcano's old lava flows, the researchers created a mock-up of the subterranean conditions under Cerro Uturuncu in the laboratory. They subjected the rock to various pressures and temperatures to test its conductivity and other features. They could then extrapolate the data from these experiments to the real-world water reservoir under the volcano.

Contrary to elementary-school diagrams of how volcanoes work, researchers have discovered over the past decade or so that there are very rarely chambers of molten magma beneath the volcano's cone. Instead, volcanoes are fed by "mush" — a partially solid, partially liquid zone of very hot rock under great pressure. Rock melts under a range of temperatures, Blundy said, so the liquid (and gas) portions of the mush can get captured in the pores of portions of still-solid rock.

The Altiplano-Puna magma body of mush that underlies Cerro Uturuncu is about 10 percent liquid, Blundy and his colleagues found. Of that liquid, 10 percent by weight is dissolved water. Measured by the proportion of water molecules in the mix, water is about 25 percent of the melted rock, which explains the high electrical conductivity, Blundy told Live Science.

The entire magma body is about 120,000 cubic miles (500,000 cubic km) in size, Blundy said. Thus, the dissolved water comes to a weight of 1.4 X 10^16 kilograms — just about enough to fill Lake Superior, the largest of the Great Lakes. This water was dragged underground as the Nazca tectonic plate dove under the South American plate, and represents about 6 million years of water accumulation, Blundy said.

Similar systems are at work at other volcanoes in subduction zones, including Mount St. Helens in the Cascades. Cerro Uturuncu hasn't erupted for about 250,000 years, Blundy said. The uplift in the ground around the volcano is due to small amounts of melted rock getting squeezed out of the reservoir underneath, but it's not clear if there is a real reawakening imminent for the mountain, he said.

"What we are seeing is that these volcanoes are like little valves on top of the reservoirs, and they can be replenished with a little bit of melt moving up," Blundy said.