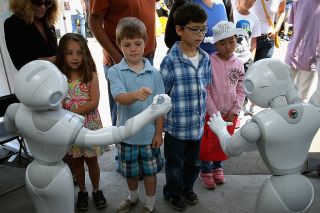 Kids who want to help realize President Obama's vision of putting humans on Mars will need an array of skills, from engineering and math to the social sciences. Here, children interact with robots at the Defense Advanced Research Projects Agency (DARPA) Robotics Challenge Expo in 2015.
(Image: © Chip Somodevilla/Getty Images)

President Barack Obama is calling today's students the "Mars generation" and urging them to take part in the goal of getting humans to the Red Planet by the 2030s.

In an Op-Ed for CNN Tuesday (Oct. 11), Obama promotes STEM education — science, technology, engineering and math — as part of this goal and touts the number of engineers graduating from American schools each year. And certainly, rocket scientists are the first thing that comes to mind when thinking about a Mars mission. But today's elementary schoolers have a wide range of options if they want to be part of sending people to Mars (or even if they want to go themselves). NASA and its collaborators and contractors employ everyone from aerospace engineers to geologists to biologists. [Sending Humans to Mars: 8 Steps to Red Planet Colonization]

"You know, it's all somewhat akin to skill sets needed by the covered-wagon crowd trying to get to the West Coast in the 1840s," said Seth Shostak, a senior astronomer at the SETI Institute, an organization that studies the possibility of extraterrestrial life. "There was a wide range of skills that might come in handy!"

The Apollo mission to get mankind to the moon involved some 50,000 people, Shostak wrote in an email to Live Science, so a similar effort for Mars would involve a lot of job openings.

Brushing up on math would be a good start for anyone looking to fill those openings.

"From an engineering perspective, we will need high-efficiency engines to take us from Earth to Mars, heat shields and retro-rockets to land us safely on the surface, and pressurized surface habitats that will provide air, water, food and radiation protection for extended-duration missions," said Anita Sengupta, an aerospace engineer at NASA's Jet Propulsion Laboratory, who has worked on plans for a Mars descent and landing.

The solutions to many of these problems are far from obvious. Research suggests, for example, that cosmic rays (charged particles left over from exploding supernovas) may cause brain damage to astronauts in the approximately seven months it will take to fly to Mars. Energetic particles from solar flares are another problem, according to NASA. The spacecraft that travel to Mars will thus have to include some kind of shielding. Because the Martian atmosphere is thinner than Earth's, and the planet doesn't have a magnetosphere to deflect charged particles, Mars travelers will need protections on the planet, too.

"We don't have the hardware to send people to Mars yet," Shostak said.

Hardware may be crucial, but the squishier sciences are also going to be needed if humanity hopes to visit its planetary neighbor. One of the main motivations in going to Mars might be to find out if the planet ever supported life, Shostak said. That kind of research will involve geologists and biologists. [7 Most Mars-Like Places on Earth]

Physicians and medical researchers already work for NASA to study the effects of zero-gravity on astronauts and other facets of the space experience. In fact, if you don't have a head for science and math and still want to help, keep an eye on the University of Texas Medical Branch at Galveston. NASA runs a bed-rest center there where volunteers literally lie down in the name of science. Bed rest mimics microgravity and helps researchers figure out how to combat effects like bone loss and muscle wasting.

Psychologists are also helping with Mars preparations. The question is what a year or more of living in close quarters with only a few other people will do to the human psyche. Just two months ago, one faux-Mars crewmember of six emerged from a year of isolation in a geodesic dome on the island of Hawaii. Crewmembers told Space.com that one lesson that emerged from the experience was the need for better sound-proofing in habitat buildings.

Other key personnel? Biochemists, food scientists and horticulturalists. NASA even has a Veggie Project Manager. "Veggie," in this sense, is a nickname for the Vegetable Production System, a "deployable plant growth unit capable of producing salad-type crops." A preliminary report on growing plants in simulated Martian soil (which is really not much more than crushed rock) is due in mid-January, according to NASA.

Lots of people have the smarts to make it in the space business, said Leroy Chiao, a former NASA astronaut and now CEO of the business-training company OneOrbit. Personal drive makes the difference in who actually makes it to space. (For the record, Chiao majored in chemical engineering.)

"Basically," Chiao wrote in an email to Live Science, "my advice to young people is to have a dream, make a plan, have the courage to go for it, work hard and persevere."