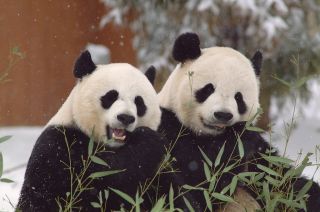 As both a national treasure of China and the symbol of the conservation-oriented World Wildlife Fund, giant pandas are known by the world over — particularly for their formally low breeding success in captivity. But just what's involved in panda-bear mating, both in and out of the wild?

Giant pandas are solitary bears that live in rather fixed home ranges. They generally come together only during the mating season, which occurs between mid-February and mid-May. "Most females go into estrus mid-March through mid-April," said Meghan Martin-Wintle, an applied ecologist and director of PDX Wildlife, a nonprofit conservation and research organization based in Portland, Oregon.

Males home in on females' auditory and olfactory cues, and three to four of them will congregate on a single female. However, females ovulate and are receptive to mating only a few days a year. "They have just this one day that is the best and they have a day or two on either side," Martin-Wintle said.

As females near ovulation, they will hang out in trees while males compete for dominance on the ground.

"It's a lot of posturing — they do these barks, like a dog, and they do these growls, " Martin-Wintle explained. And though it may be hard to imagine, male giant pandas do get into physical altercations. "They do lunges and they will come together and do swats and even try to grab onto the nape of each other's necks."

Dominance is usually established pretty quickly. The champion male will then stay close to the female and charge at any intruders, until the female comes down from the tree ready to mate.

Given that researchers rarely observe panda bears mating in the wild, it's unclear what's involved in sexual selection or if females always mate with the dominant male in her home range, Martin-Wintle said. But females in captivity, at the very least, are known to sometimes completely reject males.

For giant pandas, mating is a difficult affair, in part, because male giant pandas have one of the smallest penises relative to body size in the animal kingdom, Martin-Wintle said. A willing female must get into the lordosis posture, in which she lowers her front end, arches her back down and raises her tail end up, putting her vaginal cavity in the right position for the male to enter her from behind. "And once he obtains the position, she has to shove on to him," she said. [The Weirdest Penises in the Animal Kingdom]

After orgasm, both male and female giant pandas bleat, or let out a goat-like cry. The male will then do a "roll back," in which he sits on his butt and lower pelvic area and pulls the female so that she's sitting on him — and holds on as long as he possibly can. It's unknown why the male does this.

After mating, the male will stick around and possibly mate with the female a few more times, until she's no longer ovulating.

When captive breeding programs for giant pandas first got started in the 1950s through 1970s, the projects had a very low success rate. There were a few reasons for this failure, Martin-Wintle said.

For instance, scientists didn't understand the bears' communication system or how important it was for mating. The animals were kept separate and only brought together when it was time to mate, so mating pairs weren't able to exchange scent and vocal cues as they normally would in the wild.

Additionally, "we weren't really successful at getting the mothers to raise their cubs, and we weren't good at hand-raisingthem either," Martin-Wintle said, adding that one problem was that cubs must be physically stimulated to defecate.

Today, panda bear captive breeding programs have much higher success rates, but they could still be better. Though these programs make sure to pair adult giant pandas that are genetically separated, they don't take into consideration behavior and mate choice. "We are removing many of the things we know about Darwin and sexual selection," Martin-Wintle said.

In a study published late 2015, Martin-Wintle and her colleagues found that pandas paired with mates they preferred were much more likely to successfully have sex, produce cubs and adequately care for their young. The researchers are now looking at whether allowing males to compete for a female also improves reproductive success, possibly by increasing testosterone and sexual motivation.