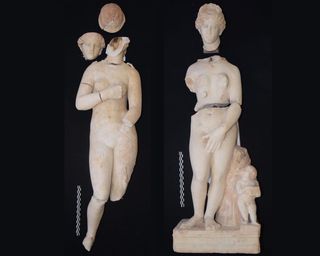 The statues, which date to the second century A.D., are nearly intact and are remarkably well preserved, retaining traces of the paint applied to them centuries ago. They were discovered by archaeologists and graduate students from the U.S. working in collaboration with the Department of Antiquities of Jordan.

Carved in a distinctly Roman style, the statues hint at ways in which Rome influenced local culture in Petra, following its annexation of Nabataea — the Arabic kingdom that included Petra — in A.D. 106. [In Photos: Mysterious, Giant Platform at Petra 'Hidden' in Plain Sight]

Petra is a sprawling city covering 102 square miles (264 square kilometers) in southern Jordan; it's partly freestanding and partly carved into the surrounding desert bedrock. Two thousand years ago, it was the Nabataean capital, serving as an important stopping point along major caravan routes. It is perhaps best known for its magnificent tombs, temples and other impressive buildings, and was featured as the purported hiding place of the Holy Grail in the 1989 movie "Indiana Jones and the Last Crusade."

Archaeologists have been investigating Petra's ruins since the late 1920s, but there is still much to discover, according to archaeologist Tom Parker, co-director of the excavation team that found the statues. The team's three-year project focused on Petra's North Ridge, located in a previously unexplored area where the city's less privileged residents lived and were buried, said Parker, a history professor at North Carolina State University.

The statues were nearly complete, with the heads and most of the bodies recovered, and archaeologists identified the standing figures as the goddess Aphrodite. She was also known to the Romans as Venus, but was more commonly identified by her Greek name in the eastern half of the empire where Petra was, Parker explained. One of the two sculptures, complete from the waist down, was still attached to its base, upon which a knee-high Cupid also stood, gazing up at the goddess.

Though the statues were in several pieces, the damage and wear to their surfaces were surprisingly light, Parker told Live Science.

"Greek and Roman statues were decorated with paint, but that rarely survives," he said. "And we have traces of paint surviving on both of these Aphrodites."

The discovery was surprising, Parker said. The archaeology team originally suspected that the building where the statues were discovered would be a humble domestic structure that would provide clues about the city's lower classes. But instead, it proved to be an upscale urban villa, complete with a bath complex that only elite residents of Petra would have had, Parker said.

According to Parker, the building, which the archaeologists dated to the first century A.D., is thought to have been abandoned by the turn of the second century and used as storage for debris and damaged structures following an earthquake that struck Petra in A.D. 363.

"The statues were packed in pretty tight — I think that's what preserved them in such extraordinary condition," Parker told Live Science.

Coins and pottery shards found nearby helped the team determine when the second-century statues had been placed in the building — likely late in the fourth century.

Numerous other artifacts have also emerged from North Ridge excavations over the past three years, hinting at details of daily life among Petra's nonelite members. This archaeological evidence can also provide valuable clues about the present, Parker suggested.

"We're the end product of millions of years of evolution and thousands of years of historical development," he said. "This region of the world — the cradle of Western civilization — shaped who we are. We still feel their influence in a very powerful way today."