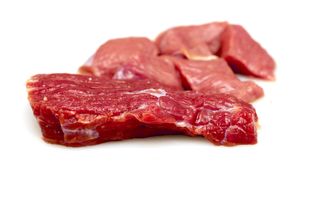 People have strong feelings about meat — not only about how it tastes, but also how the animals that provide it are raised. In fact, those feelings are so strong that they actually influence the way people perceive the meat's taste, a new study says.

In the study, people reported that meat that carried a label saying it was from a factory farm tasted worse than meat labeled as "humanely raised," when the samples were actually identical.

The researchers said the results are a basic demonstration that our "affect" — which is a technical term for the ingredients of our emotions — can influence our experience of eating food. [Top 7 Germs in Food That Make You Sick]

"You're always in an affective state that colors what you see and hear, and now, we know also [that it influences] what you taste and how much food you eat," said study co-author Lisa Feldman Barrett, a professor of psychology at Northeastern University in Boston and author of the forthcoming book "How Emotions Are Made" (Houghton Mifflin Harcourt, 2017).

In the study, the researchers did three experiments, involving samples of beef jerky, roast beef and deli ham, that came with different descriptions. For example, the humanely farmed description of ham said, "This ham was raised on a farm that focused on animal welfare," and mentioned grassy pastures and the chance for pigs to socialize with other pigs. Meanwhile, the factory-farm version read, in part: "This ham was produced at a factory farm that focused on production." In this particular experiment, participants first ate unlabeled ham to test their baseline perception.

In all three experiments, the researchers found that the participants gave different scores to the samples that were labeled differently, even though the meat samples were actually identical. In general, the participants who read descriptions of factory-farming practices ate less, were less likely to say they would eat that meat again and said they would pay less for it.

In one trial involving ham, participants even gave different ratings to specific aspects of the flavor of the meat that was labeled as being from a factory farm — they said it was saltier and greasier than the "humanely raised" meat.

Barrett said she expected that the participants would rate the meat labeled as humanely raised more highly, but the participants did not rate that meat better than samples with either no label or a neutrally-worded description.

This could be because the meat — all of which actually came from a farm that advertises having humane practices — was high-quality to begin with, and thus there was little room for improvement, the researchers said. Or, it could be because the participants, most of whom were college students, assumed the meat was farmed in a humane fashion unless they were told otherwise, Barrett said.

"We know, in many ways, that our expectations change our way of seeing the world," said Dan Ariely, a behavioral economist at Duke University who was not involved in the study. And the researchers pointed to past work that showed that labels that say "organic," "eco-friendly" and "fair trade" may all affect people's perceptions of food. [6 Foods That Are Good For Your Brain]

However, Ariely said it was not clear what factor was actually driving the effect seen in the study.

"What's unclear from the study is whether it's a moral issue, or an issue that has to do with expectations about taste," Ariely said. In other words, the students may have responded more negatively to eating the factory-farm meat because of their moral issues with factory-farm practices, or they might have had a negative association with the quality of those products.

Barrett noted that the researchers were not trying to evaluate the students' morality about factory-farm meat but rather were using labels to change the participants' dispositions. "We were interested in whether 'affect' influences taste and eating behavior," she said.

Ariely said there's value in exploring precisely what people expect from their food, and what effects those expectations may have.

Next, the researchers will manipulate specific qualities of the meat, such as its saltiness, to help quantify the size of the effect beyond how people report the experience, Barrett said. They may also try to find the conditions under which a label of "humanely farmed" may have a positive effect on people's experience of eating.

The paper was published Aug. 24 in the journal PLOS ONE.