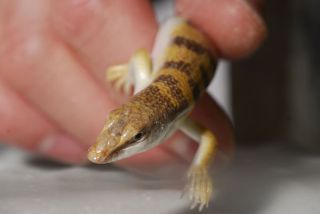 The sandfish is a small lizard native to the Sahara desert the burrows through the sand.
(Image: © Georgia Tech Photo: Gary Meek)

A little Saharan lizard "swims" through desert sands by undulating its body in a series of wave-like motions, a new study finds.

The sandfish (Scincus scincus) is a small lizard typically about 4 inches long that is native to the Sahara desert.

The lizard has a long, wedge-shaped snout it uses to quickly burrow into the sand. Its body has flattened sides and is covered with smooth, shiny scales. Its legs are short and sturdy, with long, flattened toes and a tail that tapers to a point.

Researchers at Georgia Tech built a 7-inch by 8-inch by 4-inch deep glass bead-filled container through which they could monitor the lizards' movements with high-speed X-ray imaging.

After the lizards dove in, they placed their limbs at their sides and made a wave-like motion with their bodies that propelled them like a snake, but beneath the surface rather than on top .

{{ video="LS_090716_sandfish" title="Swimming Through Sand" caption="A sandfish crawls on the sand before it burrows down and slithers like a snake to ‘swim’ through the sand." }}

"When started above the surface, the animals dive into the sand within half a second. Once below the surface, they no longer use their limbs for propulsion — instead, they move forward by propagating a traveling wave down their bodies like a snake," said study leader Daniel Goldman.

The animals used the same motion no matter how dense the material was, but, unexpectedly, they swam faster in more closely packed material.

And the faster the sandfish propagate the wave across their bodies, the faster they move forward. They can at speeds as fast as 6 inches per second (0.33 mph).

This speed allows them to escape predators and the desert heat, as well as quickly ambush prey that they detect from vibrations.

"The results demonstrate that burrowing and swimming in complex media like sand can have intricacy similar to that of movement in air or water," Goldman said. The results of the study are detailed in the July 17 issue of the journal Science.

Understanding how the sandfish move could reveal how other small burrowing animals, such as worms, scorpions and snakes, can transform the landscape in their burrowing.

It could also help engineers build sandfish-like robots that can travel through similar environments.

'If something nasty was buried in unconsolidated material, such as rubble, debris or sand, and you wanted to find it, you would need a device that could scamper on the surface, but also swim underneath the surface," Goldman said.

The study was funded in part by the National Science Foundation and the Burroughs Wellcome Fund.