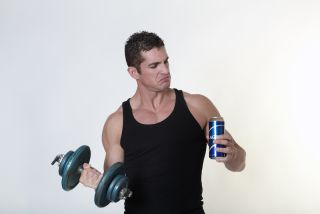 Getting drunk may undo the effects of an intense workout, at least for men, new research suggests.

Men in the study who drank alcohol after doing heavy strength training showed reduced levels of the chemical signals that spur muscle growth and repair compared to men who did not drink, according to a new study that will be published in a forthcoming issue of the Journal of Strength and Conditioning Research.

"A little bit of alcohol is probably not a problem," said study co-author Jakob Vingren, a biology and kinesiology professor at the University of North Texas in Denton. "But if you're doing heavy resistance training, if you're going to go out drinking that night, don't go to the gym right before. It's possible the next day you're going to be worse off than if you hadn't gone to the gym." [7 Ways Alcohol Affects Your Health]

Several studies have found that people who exercise more also tend to drink more, Vingren said. What's more, college athletes binge drink more often than their peers who are not athletes, during both the competitive and off-seasons, according to a 2007 study in the journal Substance Abuse & Misuse. The majority of those athletes do not think their drinking negatively affects their performance, according to a 2012 survey by the National Collegiate Athletics Association (NCAA).

The reason for this link between how much exercise people do and how much they drink is murky: It may be that reward centers in the brain are activated by both exercising and drinking, or it may be that social norms in some sports normalize drinking, or even that some people "go exercise to go earn their calories before they go drinking," Vingren said.

To see how those two effects interacted, Vingren and his colleagues asked 10 men and nine women who regularly did strength training at least two times a week to do six sets of 10 squats with heavy weight.

After the workout, researchers gave the participants either water or vodka diluted with water (those drinking water had a bit of alcohol smeared along the rim of their glasses to create the illusion of drinking alcohol.) Participants in the alcohol group drank the equivalent of between four and eight alcoholic drinks in 10 minutes, depending on body weight, Vingren said.

The researchers took muscle biopsies at three points: before the workouts, and 3 hours and 5 hours after the workout.

The results showed that in men, but not in women, drinking reduced the activation of a chemical pathway, called mTORC1 signaling pathway, that stimulates muscle growth and recovery.

It's not clear exactly why muscle recovery and repair signaling were reduced in men but not in women who drank alcohol. But one explanation is that this muscle growth pathway is stimulated by a large rise in testosterone after a workout in men. By contrast, although women do have small amounts of testosterone, they don't experience a similarly large testosterone surge post-workout, Vingren said. Alcohol has been shown to reduce testosterone response to exercise, he added.

When there are big differences in men versus women, testosterone "usually is the prime suspect," Vingren told Live Science.

Though the idea of drinking alcohol immediately after a hard workout may seem far-fetched to some, it's surprisingly common, Vingren said.

"I have been in locker rooms where as soon as the game was over, beers were brought out and cracked open," Vingren said.

What's more, luxury gyms are now offering bars on-site, meaning people may indulge in a vodka and tonic or mimosa immediately after a workout, he added.