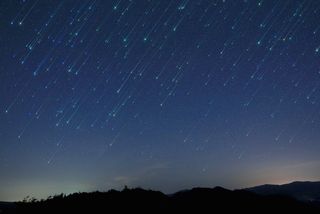 It's almost time for one of the best nighttime celestial shows of the year — the Perseid meteor shower, a spectacular array of shooting stars that is expected to peak late Thursday night and early Friday morning (Aug. 11 and 12).

"All you've got to do is go outside, find a nice dark spot, lie flat on your back and look up," Cooke told Live Science. "You don't want binoculars. You don't want a telescope. You just use your eyes." [Perseid Meteor Shower 2016: When, Where & How to See It]

As many stargazers know, the Perseids peak every August, when Earth runs into a trail of debris left behind by Comet Swift-Tuttle. The tiny pieces of debris burn up when they enter Earth's atmosphere, leaving behind streaks of light known as meteors, or shooting stars, according to NASA.

This year, however, the show will be even more stunning, with as many as 200 visible meteors per hour during its peak, from Thursday night to Friday morning, Cooke said.

"This year we expect there to be more of them because Jupiter's gravity has tugged this trail of debris closer to Earth," Cooke said.

The Perseids are named for the constellation of Perseus because they appear to come from that part of the sky, he said. But shooting-star seekers can see the meteors pretty much anywhere. Cooke offered several tips for watching the impressive meteor shower:

The Perseids will also be visible on Friday night and Saturday morning (Aug. 13), but there will be fewer meteors than there are expected to be the night before, he added.