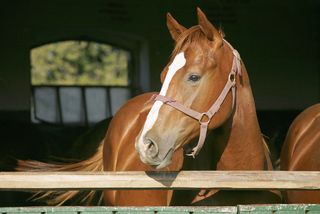 An elderly woman in Seattle died from an infection that she appears to have contracted from a horse she rode, according to a new report.

The 71-year-old woman had visited her daughter, who operates a horse boarding and riding center in King County, Washington, the report said. During the week of Feb. 21, 2016, one of the horses developed nasal and eye discharge, suggesting the animal had an infection. The daughter treated the horse with antibiotics, and the animal recovered.

But that same week, the daughter developed a mild sore throat and cough, and her mother also showed symptoms of an upper respiratory infection. Both the mother and daughter had been in close contact with the horse, with the mother petting and riding the horse on at least two days, Feb. 25 and 29.

A few weeks later, on March 2, the mother experienced vomiting and diarrhea, and was later found unconscious. She was taken to the hospital, but died on March 3, the report said. [10 Deadly Diseases That Hopped Across Species]

Officials collected a nasal swab from the previously sick horse, along with a swab of the daughter's throat and samples of the mother's blood. All three samples tested positive for the same strain of bacteria, called Streptococcus equi subspecies zooepidemicus (or S. zooepidemicus for short.) This type of bacteria is known to infect animals, including horses, pigs and cats.

It's rare that people get sick from S. zooepidemicus, the report said. When infections in people do occur, they can cause a variety of symptoms, including chills, weakness, difficulty breathing, fever, kidney inflammation and arthritis.

"[The] evidence from this investigation linked a fatal S. zooepidemicus infection to close contact with an ill horse," the report said.

The researchers recommend that people thoroughly wash their hands after contact with horses or other animals.

More research is needed to better understand factors that put people at risk for catching S. zooepidemicus from animals, as well as the different symptoms people who get infected can experience, the report said.

The report is published in the Aug. 5 issue of the journal Morbidity and Mortality Weekly Report, from the Centers for Disease Control and Prevention.