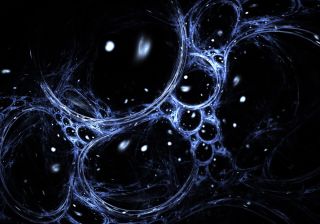 Don Lincoln is a senior scientist at the U.S. Department of Energy's Fermilab, America's largest Large Hadron Collider research institution. He also writes about science for the public, including his recent "The Large Hadron Collider: The Extraordinary Story of the Higgs Boson and Other Things That Will Blow Your Mind" (Johns Hopkins University Press, 2014). You can follow him onFacebook. Lincoln contributed this article to Live Science's Expert Voices: Op-Ed & Insights.

Science and the internet have an uneasy relationship: Science tends to move forward through a careful and tedious evaluation of data and theory, and the process can take years to complete. In contrast, the internet community generally has the attention span of Dory, the absent-minded fish of "Finding Nemo"(and now "Finding Dory") — a meme here, a celebrity picture there — oh, look … a funny cat video.

Thus people who are interested in serious science should be extremely cautious when they read an online story that purports to be a paradigm-shifting scientific discovery. A recent example is one suggesting that a new force of nature might have been discovered. If true, that would mean that we have to rewrite the textbooks.

As a physicist, I'd like to shed a disciplined scientific light on the claim.

[Beyond Higgs: 5 Elusive Particles That May Lurk in the Universe]

So what has been claimed?

In an article submitted on April 7, 2015, to the arXiv repository of physics papers, a group of Hungarian researchers reported on a study in which they focused an intense beam of protons (particles found in the center of atoms) on thin lithium targets. The collisions created excited nuclei of beryllium-8, which decayed into ordinary beryllium-8 and pairs of electron-positron particles. (The positron is the antimatter equivalent of the electron.)

They claimed that their data could not be explained by known physical phenomena in the Standard Model, the reigning model governing particle physics. But, they purported, they could explain the data if a new particle existed with a mass of approximately 17 million electron volts, which is 32.7 times heavier than an electron and just shy of 2 percent the mass of a proton. The particles that emerge at this energy range, which is relatively low by modern standards, have been well studied. And so it would be very surprising if a new particle were discovered in this energy regime.

However, the measurement survived peer review and was published on Jan. 26, 2016, in the journal Physical Review Letters, which is one of the most prestigious physics journals in the world. In this publication, the researchers, and this research, cleared an impressive hurdle. [What's That? Your Physics Questions Answered]

Their measurement received little attention until a group of theoretical physicists from the University of California, Irvine (UCI), turned their attention to it. As theorists commonly do with a controversial physics measurement, the team compared it with the body of work that has been assembled over the last century or so, to see if the new data are consistent or inconsistent with the existing body of knowledge. In this case, they looked at about a dozen published studies.

What they found is that though the measurement didn't conflict with any past studies, it seemed to be something never before observed — and something that couldn't be explained by the Standard Model.

To make sense of the Hungarian measurement, then, this group of UCI theorists invented a new theory.

The theory invented by the Irvine group is really quite exotic. They start with the very reasonable premise that the possible new particle is something that is not described by existing theory. This makes sense because the possible new particle is very low mass and would have been discovered before if it were governed by known physics. If this were a new particle governed by new physics, perhaps a new force is involved. Since traditionally physicists speak of four known fundamental forces (gravity, electromagnetism and the strong and weak nuclear forces), this hypothetical new force has been dubbed "the fifth force."

Theories and discoveries of a fifth force have a checkered history, going back decades, with measurements and ideas arising and disappearing with new data. On the other hand, there are mysteries not explained by ordinary physics like, for example, dark matter. While dark matter has historically been modeled as a single form of a stable and massive particle that experiences gravity and none of the other known forces, there is no reason that dark matter couldn't experience forces that ordinary matter doesn't experience. After all, ordinary matter experiences forces that dark matter doesn't, so the hypothesis isn't so silly.

There are many ideas about forces that affect only dark matter and the term for this basic idea is called "complex dark matter." One common idea is that there is a dark photon that interacts with a dark charge carried only by dark matter. This particle is a dark matter analog of the photon of ordinary matter that interacts with familiar electrical charge, with one exception: Some theories of complex dark matter imbue dark photons with mass, in stark contrast with ordinary photons. [Gallery: Dark Matter Throughout the Universe]

If dark photons exist, they can couple with ordinary matter (and ordinary photons) and decay into electron-positron pairs, which is what the Hungarian research group was investigating. Because dark photons don’t interact with ordinary electric charge, this coupling can only occur because of the vagaries of quantum mechanics.  But if scientists started seeing an increase in electron-positron pairs, that might mean they were observing a dark photon.

The Irvine group found a model that included a "protophobic" particle that was not ruled out by earlier measurements and would explain the Hungarian result. Particles that are "protophobic," which literally means "fear of protons," rarely or never interact with protons but can interact with neutrons (neutrophilic).

The particle proposed by the Irvine group experiences a fifth and unknown force, which is in the range of 12 femtometers, or about 12 times bigger than a proton. The particle is protophobic and neutrophilic. The proposed particle has a mass of 17 million electron volts and can decay into electron-positron pairs. In addition to explaining the Hungarian measurement, such a particle would help explain some discrepancies seen by other experiments. This last consequence adds some weight to the idea.

So this is the status.

What is likely to be true? Obviously, data is king. Other experiments will need to confirm or refute the measurement. Nothing else really matters. But that will take a year or so and having some idea before then might be nice. The best way to estimate the likelihood the finding is real is to look at the reputations of the various researchers involved. This is clearly a shoddy way to do science, but it will help shade your expectations.

So let's start with the Irvine group. Many of them (the senior ones, typically) are well- regarded and established members of the field, with substantive and solid papers in their past. The group includes a spectrum of ages, with both senior and junior members.  In the interest of full disclosure, I know some of them personally and, indeed, two of them have read the theoretical portions of chapters of books I have written for the public to ensure that I didn't say anything stupid. (By the way, they didn't find any gaffes, but they certainly helped clarify certain points.) That certainly demonstrates my high regard for members of the Irvine group, but possibly taints my opinion. In my judgment, they almost certainly did a thorough and professional job of comparing their new model to existing data.  They have found a small and unexplored region of possible theories that could exist.

On the other hand, the theory is pretty speculative and highly improbable. This isn't an indictment … all proposed theories could be labeled in this way. After all, the Standard Model, which governs particle physics, is nearly a half century old and has been thoroughly explored. In addition, ALL new theoretical ideas are speculative and improbable and almost all of them are wrong. This also isn't an indictment. There are many ways to add possible modifications to existing theories to account for new phenomena. They can't all be right. Sometimes none of the proposed ideas are right.

However, we can conclude from the reputation of the group's members that they have generated a new idea and have compared it to all relevant existing data. The fact that they released their model means that it survived their tests and thus it remains a credible, if improbable, possibility.

What about the Hungarian group? I know none of them personally, but the article was published in Physical Review Letters — a chalk mark in the win column. However, the group has also published two previous papers in which comparable anomalies were observed, including a possible particle with a mass of 12 million electron volts and a second publication claiming the discovery of a particle with a mass of about 14 million electron volts. Both of these claims were subsequently falsified by other experiments.

Further, the Hungarian group has never satisfactorily disclosed what error was made that resulted in these erroneous claims. Another possible red flag is that the group rarely publishes data that doesn't claim anomalies. That is improbable. In my own research career, most publications were confirmation of existing theories. Anomalies that persist are very, very, rare.

So what’s the bottom line? Should you be excited about this new possible discovery?  Well…sure…possible discoveries are always exciting. The Standard Model has stood the test of time for half a century, but there are unexplained mysteries and the scientific community is always looking for the discovery that points us in the direction of a new and improved theory. But what are the odds that this measurement and theory will lead to the scientific world accepting a new force with a range of 12 fm and with a particle that shuns protons? My sense is that this a long shot. I am not so sanguine as to the chances of this outcome.

Of course, this opinion is only that…an opinion, albeit an informed one. Other experiments will also be looking for dark photons because, even if the Hungarian measurement doesn't stand up to scrutiny, there is still a real problem with dark matter.  Many experiments looking for dark photons will explore the same parameter space (e.g. energy, mass and decay modes) in which the Hungarian researchers claim to have found an anomaly. We will soon (within a year) know if this anomaly is a discovery or just another bump in the data that temporarily excited the community, only to be discarded as better data is recorded.  And, no matter the outcome, good and better science will be the eventual result.