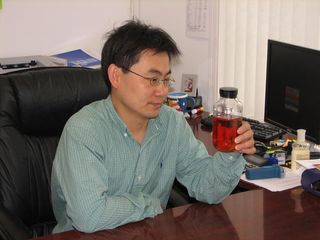 This Behind the Scenes article was provided to LiveScience in partnership with the National Science Foundation. I have been working on soybean and other vegetable-based biodiesel projects for a long time. Yet after I read a story about algae and oil from algae, in my mind I became convinced that algae is the most promising feedstock for biodiesel.  Algae — "seaweeds" in Latin — were some of the first plant-like organisms on Earth.  They are photosynthetic, like land plants, and we consider them to be "simple" because they lack the many distinct organs found in land plants. Because some algae species are oil rich, the amount of oil we can collect from them is hundreds of times greater than the amount of oil that can be collected from an equal amount of a traditional, plant-based, biodiesel feedstock like soybeans. Algae can also grow in places away from farmlands and forests, minimizing the damage caused to ecosystems and food-chains.  In my opinion, such factors make algae oil the most promising candidate for producing biodiesel in quantities large enough to entirely replace petroleum-based transportation fuel in the United States, a powerful solution for sustainable energy development.  Currently, most biodiesel is made from soybean oil. In order to quickly convert soybean oil into biodiesel, a catalyst needs to be used. There are many different types of catalysts — compounds that make chemical reactions happen more quickly than they would otherwise. For example, a catalyst could make a chemical reaction happen in an hour instead of three days.  The catalyst used to make biodiesel from soybean oil is a liquid. This means that when the chemical reaction is finished, the catalyst is mixed in with all the reaction products — the biodiesel and any byproducts made during the reaction. To make a marketable fuel product, the catalyst has to be separated from the reaction products, a process that takes a lot of work and energy and produces undesirable waste.  This reaction to convert soybean oil to biodiesel takes place in a "batch" reactor, which looks like a large pot. In a batch reactor, only a certain amount of product can be made at a time.  For example, a small batch reactor could make 10 gallons of biodiesel in an hour.  After that hour, the reactor would have to be stopped, so that the biodiesel and byproducts can be removed. Then, more soybean oil and catalyst would be added, and the reaction would start all over again. This type of reactor is not very good for making large amounts of biodiesel. I have spent a lot of time studying algae and have learned a great deal about algae growth, extraction and conversion to biodiesel. In my opinion, the amount of algae oil that will be available for biodiesel production will eventually be much larger than the amount of soybean oil available.  If the liquid catalyst and batch reactor are used to change the algae oil into biodiesel, even more work and energy would be needed to separate the reaction products from the catalyst. Giant facilities with many large reactors would have to be built, and a large amount of waste would be produced. The energy and environmental benefits would be lost.      Fortunately, there are other types of catalysts and reactors. My Ph.D. is in chemical engineering and I have been working in the catalysis field for a long time. My background on heterogeneous (multiple component) catalysts and fixed-bed reactor engineering led me to a new catalytic approach for the algae oil biodiesel production.    Sponsored by the National Science Foundation, I worked with my colleagues at United Environment & Energy (UEE) to develop a solid catalyst and a special reactor that can convert algae oil into biodiesel. I spend most of my day working with other scientists and technicians on experiment design, execution and data analysis.  In the system we created, instead of using a large pot, like a batch reactor, we use a reactor that is a hollow tube filled with a solid catalyst. The algae or soybean oil flows through the tube, and the reaction to make biodiesel happens as the oil flows over the catalyst.  The solid catalyst stays in the tube, so it is already separated from the biodiesel and byproducts — no extra work or energy is needed!  Also, the reactor can produce biodiesel continuously. It does not need to be stopped and re-started like a batch reactor, so it can make a lot more biodiesel in a given amount of time than the batch reactor can produce.  In addition, the solid catalyst does not need to be replaced very often (the liquid catalyst would have to be replaced every time the batch reactor is emptied), no waste streams are produced, the cost is much lower, and the tube reactor is smaller than batch reactors, so it can be moved from one place to another.  I believe that using this solid catalyst and tube reactor can help to quickly replace petroleum diesel with biodiesel, and in the process, decrease the energy consumed during production, reducing the overall environmental impact.  For Phase I of our NSF project we had to successfully prove that our solid catalyst and tube reactor can work and determine optimal tube reactor configurations and operating conditions.  Currently, we are using algae oil samples supplied from algae producers, but we have just started a new project working with our partners to grow algae and extract oil from it. Next, we are working on testing the stability of the algae biodiesel — and increasing its resistance to oxidation, if necessary — so that the fuel can be used in diesel engines.  After those tests are complete, we will concentrate on scaling up this solid catalyst and reactor system to a larger size so that more biodiesel can be produced.