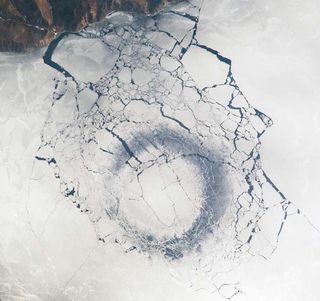 Late in April 2009, astronauts aboard the International Space Station observed a strange circular area of thinned ice in the southern end of Lake Baikal in southern Siberia. The ice ring had a diameter of 2.7 miles (4.4 km).
(Image: © NASA)

Strange circles have once again appeared in the frozen surface of Lake Baikal in Siberia, as spotted by astronauts aboard the International Space Station this April. News reports described the ice rings as a puzzling phenomenon.

But experts say they can explain the mystery, and it's not aliens — methane gas rising from the lake floor represents the likely culprit.

Methane emissions can create a rising mass of warm water that begins swirling in a circular pattern because of the Coriolis force, or the phenomenon caused by the Earth's rotation that also helps create cyclones. [Earth from Above: 101 Stunning Images from Orbit]

"Once the water mass reaches the underside of the ice on the surface of the lake, the warm water melts the ice in a ring shape," said Marianne Moore, a marine ecologist at Wellesley College in Massachusetts who has spent much time studying Lake Baikal with Russian researchers. The lake is the largest (by volume) and deepest fresh water lake on Earth.

The latest ring patterns included a circle of thin ice with a diameter of 2.7 miles (4.4 km), although the circular patch was becoming a hole of open water. Astronauts spotted similar ice circles in both 1985 and 1994, and satellites have also made sightings over the past years.

This phenomenon is nothing new to the Russian government, which has documented circle sightings on an official Ministry of Natural Resources Web site.

"Interestingly, the government is also warning people that abnormally high emissions of methane may occur in these areas in the summer and fall, posing risks for ships," Moore told LiveScience.

The Russian Ministry of Natural Resources points out that random emissions of natural gas have probably always occurred in Lake Baikal. And such emissions would have created ice rings every few years.

"But, because of the huge size, it is practically impossible to see a ring standing on the ice or even from a mountain," the Ministry Web site notes. The Russian government has ordered daily space monitoring of the Lake Baikal area in recent years, which prompted many of the satellite sightings.

Tectonic activity deep in the Earth may be the trigger for such methane gas release, according to the Russian government.

That could have major consequences for Lake Baikal's rich array of plants and animals, Moore cautioned — especially in combination with a warming climate. Both could lead to spring ice disappearing more rapidly from Lake Baikal, which can typically hold onto an ice cover through June.

"Unlike other lakes in the world, spring ice is essential for the reproduction of the lake's top predator (the Baikal seal) and the dominant plants (under-ice phytoplankton) at the bottom of the food web," Moore said. "Without spring ice, the food web of this lake will be disrupted substantially."