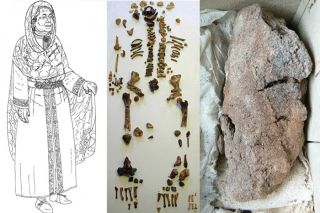 Drawing of the old queen Arnegunde, with the dress she probably wore when she died.
(Image: © L. Brossard/Inrap)

The mystery of how a lung from ancient French royalty became mummified has been solved after decades of uncertainty, according to an international team of researchers.

In 1959, a preserved lung was uncovered by archaeologist Michel Fleury inside a stone sarcophagus in the Basilica of St Denis, Paris, the site where the kings of France have been buried for centuries. The lung was found with a skeleton, a strand of hair, jewelry and several fragments of textiles and leather.

On a gold ring, the inscription "Arnegundis" around a central monogram "Regine" revealed the remains belonged to the Merovingian Queen Arnegunde (about 515–about 580), one of the six wives of King Clotaire I (511-561) and the mother of King Chilpéric I (about 534-584).

Since the discovery, the fine preservation of the lung raised questions over whether her lung had naturally mummified or had been embalmed.

"From a macroscopic point of view, the lung appears nicely preserved, while the body is completely skeletonized," Raffaella Bianucci, a bio-anthropologist in the Legal Medicine Section at the University of Turin, told Discovery News.

It turns out an elaborate copper belt played a key role in the lung's mummification.

The international team led by Bianucci presented the results of their investigation at the International Conference of Comparative Mummy Studies in Hildesheim, Germany.

Further biochemical analysis showed the presence of benzoic acid and related compounds in the lung, although at low levels.

"These substances are widespread in the plant kingdom and similar profiles have been already reported in the balms of Egyptian mummified bodies," Bianucci said.

According to the researchers, the findings support the theory that, as suggested by historians, Arnegunde might have undergone an oral injection of a fluid made of spices/aromatic plants.

"Since Arnegunde was wearing a copper alloy ... belt around her waist, we speculate the copper oxide in the lungs is from weathering of the belt," Bianucci said.

"The preserving properties of copper, combined with the spice embalming treatment, might have allowed the preservation of the lungs," she added.

Mystery Mummies: Who Are They? Photos

Historical accounts indicate that artificial mummification, based on the use of spices and aromatic plants, was used in sixth century France to treat the bodies of kings, queens, holymen and holywomen.

The Merovingians embalmed these elite individuals following a procedure they had learned from the Romans, which they, in turn, had adopted from Egypt.

"Clearly the Merovingian mummification was much less sophisticated," Bianucci said,

"It was essentially based on the use of oil and resin-soaked linen strips used with spices and aromatic plants such as thyme, nettles, myrrh and aloe," Bianucci said.

"Queen Arnegunde is a particularly complex case," Bianucci said. "Since she was exhumed in 1959, her remains underwent several displacements, disappearing in the 1960s to finally resurface in 2003."

Investigations on Arnegunde' skeletal remains revealed the queen was 5'1" tall and around 61 years old when she died of unknown causes.

Albert Zink, Head of the EURAC Institute for Mummies and the Iceman in Bolzano, found the research to be similar to the case of a Coptic mummy, dating from about 600-1000 A.D.

"During the study of this mummy we discovered the body did not undergo organ and brain removal. Instead, it appears that an embalming solution was injected through the mouth," Zink told Discovery News.

"Just like in the case of the Merovingian queen, the liquid agglomerated in the lung, which is the only organ that is well preserved," Zink said.

Queen Arnegunde represents one of the few specimens from the Early Middle Ages for whom researchers have both an historical account, human remains and artifacts. Moreover, Arnegunde belonged to Merovingian royalty.

Distinctive for their shoulder-length hair, these Frankish kings ruled in parts of France and Germany from the fifth to the eighth centuries, establishing the most successful post-Roman kingdom in western Europe.

More recently, the Merovingians became popular with the publishing of Dan Brown's "Da Vinci Code," which revived the story that Jesus Christ and Mary Magdalene had married and their bloodline survived in the Merovingian dynasty.

In 2006, DNA analysis of a sample from Arnegunde' skeletal remains was arranged and filmed in a documentary.

The aim was to check whether she had a Middle Eastern haplo type. She did not. A princess of Thuringia, daughter to King Baderic, Arnegunde had married into the dynasty and was not a direct descendant of the Merovingian line.

Bianucci and colleagues were not interested in conspiracy theories but rather focused on the mummified lung.