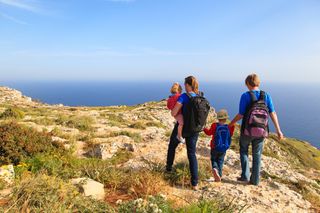 A family hike is a great way to get kids to put down their screens and explore the outdoors this summer.
(Image: © Nadezhda1906 / Shutterstock.com)

It's a battle many parents know well: getting their kids off the iPad and into the great outdoors during summer break.

The solution, according to researchers and outdoor advocates? Take a hike — even one close to home. Getting the most out of the outdoors doesn't require a weeklong backpacking trip. And for many families, this summer will be the perfect time to launch an outdoor adventure: The White House's Every Kid in a Park initiative is offering every family of a fourth-grader free access to national parks, forests and wildlife refuges this year.

The initiative comes at a time when kids are less outdoorsy than ever. A 2011 study commissioned by The Nature Conservancy of 602 13- to 18-year-olds — chosen to be representative of the U.S. population by age, gender, geography and race — found that only 10 percent reported spending time in a natural outdoor area, like a park, each day. Less than 40 percent said they spent time in a natural outdoor area even once a week. (Our sister site, Active Junky has a great guide for figuring out what's the best hiking backpack for you.)

In a national study, researchers from the University of Georgia and the U.S. Forest Service found that although a majority of kids ages 6 to 9 spend time outdoors every day, much of that time includes sports or non-nature-based activities. The third-most-common outdoor activity mentioned by respondents, after playing with friends and engaging in physical activity, was using electronic devices outside, according to the study presented in 2011. Only about 30 percent of kids reported hiking, camping, fishing, wildlife watching or other outdoorsy pastimes. Race and class play huge roles in who gets time in nature, the researchers found: About 34 percent of white children and 28 percent of Hispanic children said they hiked, camped or fished, but only 12 percent of African-American children had those opportunities.

By comparison, screen time is booming. An 8- to 18-year-old American uses at least one screen, on average, 7 hours and 38 minutes each day, according to a 2010 national survey by the Kaiser Family Foundation. In this area as well, there are racial and ethnic disparities, with African-American and Hispanic youth spending 4 more hours a day consuming electronic media than white youth.

There are real barriers to getting outside, including transportation into nature, safety fears and parents who don't feel comfortable outdoors.

"We have a young generation of parents now that may be the first de-natured generation of parents," said Richard Louv, a journalist and author of "Last Child in the Woods: Saving Our Children from Nature-Deficit Disorder" (Algonquin Books, 2008). "The younger you are in the U.S., the less likely it is you've had any kind of experience on your own independently in nature."

But polls and surveys show that both kids and parents value time outdoors. They may just need a little inspiration to get out there. Consider these tips from two outdoor experts as a starting point:

Jeff Alt carried his toddler daughter along the coast of Ireland in a kid's hiking pack. He and his wife had their son out on the Appalachian Trail at 6 weeks of age. Alt, author of "Get Your Kids Hiking: How to Start Them Young and Keep It Fun" (Beaufort Books, 2013), is an outdoor enthusiast, to say the least. But you don't have to be a dedicated backpacker to take Alt's first bit of advice: Introduce outside activities to your children when they're young. (Active Junkey also has a well researched Buyer's Guide for Hiking and Backpacking Packs.)

"What's important is that you're carving out that this is OK," Alt told Live Science. A baby in a carrier can take in the sight of a running deer and hear the rustle of leaves, he said. A toddler can dig in the dirt or stop to admire an ant.

"If you get in there young and inject hiking and camping into their life, then they just think that's what you do," Alt said. That pays off later, he said, when kids are willing to strap on daypacks and race each other up the trail.

Time in nature can be a godsend for tired new parents, Louv writes in his upcoming book, "Vitamin N: The Essential Guide to a Nature-Rich Life" (Algonquin, 2016). Research finds that time in green space reduces stress for adults, and baby-friendly hiking groups exist in many cities to combat the social isolation of new parenthood.

Whether you're an experienced hiker taking a toddler on the trail, or a newbie with a kid of any age, it pays to keep expectations moderate. Pushing kids to the point of discomfort is likely to give them negative associations with hiking, and positivity is key, Alt said.

"I never plan anything that's beyond what they can physically handle," he said. "In fact, I underestimate their abilities, because I'd rather finish with energy to spare rather than hope we make it back to the car."

For a toddler, that means a hike might span only 50 yards (45 meters), Alt said. By instituting "child-directed hiking," parents can slow down and see the world from a kid's-eye view. They can also make the hike a pleasant experience and get the child excited for future adventures.

Child-centric nature play is an important part of life, Louv told Live Science. A 2015 case study at Indiana Dunes National Lakeshore found more creativity and inclusivity among children who were playing in a natural play zone versus on structured playgrounds. [The Top 5 Benefits of Play]

"Let them lead the way," Louv wrote in "Vitamin N." "Encourage them to stop to turn over rocks, touch moss, toss pebbles into a puddle or pond and, when they can, climb on and over rocks and fallen trees."

Giving kids ownership over the hike can get them excited, Alt said. For example, try letting them help pack their own snacks and supplies, or let older kids plan a route or research trails. Toddlers might want to bring along a favorite toy or book. And the promise of a picnic can get even little ones moving, Alt said.

"They know they're going to get their favorite mac and cheese or goldfish crackers —  whatever it is they gravitate toward," he said.

On the trail, preschoolers and elementary school children might join a game of "I Spy," Alt said, and older kids often get into identifying plants or looking for wildlife. When leading group hikes at parks, Alt has kids make up fictitious "trail names" and shares kid-friendly facts about the area, like what kind of dinosaurs once roamed there. [The 10 Most Poisonous Plants]

"The whole point with that [elementary] age group is to keep them filled with new stuff or help them connect with what they're learning in school," Alt said.

This sort of involvement can help keep nature in children's lives off the trail, too, Louv said. For instance, kids (and adults) can work to create a butterfly sanctuary in the backyard, or plant a green roof, or get involved in citizen-science ventures like the Great Backyard Bird Count.

"We can all not only be spectators or get direct experience from nature for its own sake," Louv said. "We can actually help nature, not only by preserving but by restoring. … There's a special feeling that people get from that."

Alt and his family have another way to make their time in nature meaningful. On the Appalachian Trail, where goodwill reigns and surprise gear or food from strangers is known as "trail magic," the family always brings extra snacks to share with other hikers.

"They're little trail angels," Alt said of the kids.

If you can't wrestle the iPhone from your child's hands, don't. While technology-free time is something outdoor experts promote, both Alt and Louv also advocate using tech to connect with nature.

A smartphone on Airplane Mode (to prevent texting and battery drain) can act as a camera, Alt said. There are apps that can identify plants or birds, or let kids geocache, which is sort of like GPS-based treasure hunting. (From our sister site, Tom's guide: The 10 Best Hiking Apps)

In "Vitamin N," Louv suggested a compromise: Use digital devices at the beginning and end of a hike, with an agreed-upon tech-free time in between. He also recommended asking kids their preferences. Many children will prefer traditional maps and compasses to the screens they're used to, he wrote.

One of the biggest barriers to getting outside is fear, Louv told Live Science. Federal park staff report seeing more sheltered kids who flinch at the sight of insects, fish, bats and birds. More broadly, Louv said, parents fear letting their kids play free outside because of fear of abduction or crime — even though, statistically, the rate of violent crime against children outside the home has been dropping for at least three decades.

"What's going up is the 24-hour news coverage" of the few crimes that do occur, Louv said.

Part of conquering fear is being prepared. Outdoors experts recommend having these "10 essentials" with you on backcountry excursions, even just for day hikes:

The other aspect of conquering fear is recognizing and managing risk, Louv said. He quoted educator and University of Texas at Austin professor emeritus Joe Frost, who said that when kids fall from trees and break their arms, it's usually because they lacked the arm strength to hold on to the branch. The solution, Louv said, is not to cut down the tree, but to build up the child. Approaching nature with wonder and respect, and encouraging kids to build resilience in the face of small scrapes and bruises, can build their self-confidence, he wrote.

"One of the ways to inoculate against really stupid risk-taking as teenagers is to encourage small risk when they're kids," Louv told Live Science. "Nature's a great place to do that, where they can master the risk and learn about their limits."

Hiking doesn't have to mean rugged solitude. Joining up with other families to hit the trail can get kids excited, ease parents' minds and break down barriers to access.

The nonprofit Children & Nature Network, which grew out of Louv's first book, has an online tool kit for starting a family nature club. (These nature clubs exist in many cities already.) These groups let families band together to plan group hikes and outings. Kids can entertain each other on the trail, Louv said, and parents can gain outdoor experience while chatting with each other.

Group outings can be a boon for families with limited access to transportation into nature. The Sierra Club, for example, runs a program called Inspiring Connections Outdoors to get kids out of urban areas and into the countryside.

And adolescents, especially, may have a better attitude toward family hikes if they could bring a friend along, Alt said.

"You may not have that one-on-one time to share that philosophical thought, but my thought is, you're keeping them out there," he said.

Finally, don't throw in the towel over complaints from the backseat. Kids may whine in the moment, Louv said, but they're making memories — and while they won't remember a day of watching television or playing video games, even a mediocre day outside can enshrine itself in memory.

"What I hear from parents a lot is that, when they would take their kids on long hikes or take them to the national forest or some other outdoor adventure when they were little, often the kids would complain and want to get back to the video game and sometimes make the parent guilty for taking them outdoors," Louv said. "Years go by, and the kids come back from college, and they're sitting around the kitchen table with the family and say, 'Remember that awesome hike we took?'"