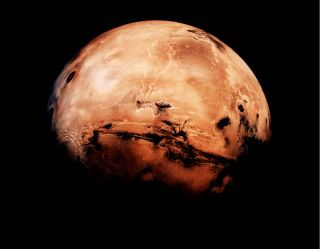 Mars will slow and reverse its course in the night sky this weekend — a trick of perspective as the Red Planet and Earth both circle the sun.
(Image: © NASA/Lewis Research Center)

Look up this weekend to catch bright Mars as it begins a zigzag detour across the spring sky.

In just six weeks, the planet Mars will make its closest approach to Earth since November 2005. These days, the Red Planet appears in the southeast skies just before midnight, glowing brightly like a yellowish-orange ember, and it is brightening noticeably with each passing week.

If you have been following Mars since New Year's Day, you may recall that back on the first day of the New Year, it was shining in the zodiacal constellation of Virgo. It was then 156 million miles (252 million kilometers) from Earth. In contrast, by the end of next week, Mars' distance from Earth will have diminished to less than 59 million miles (95 million km); it now shines about 10 times more brightly than it did at the start of this year. [Watch: Mars' Retrograde Motion Explained, Jupiter & Mercury Views, Too! ]

Also since Jan. 1, Mars has progressed along on an easterly course through the background stars of the zodiac. It currently resides in the nonzodiacal constellation of Ophiuchus, the Serpent Holder.

But on Saturday, April 16, that steady eastward course is going to come to a stop.

Actually, for the past few weeks, Mars has appeared to slow in its eastward trajectory; almost seeming to waver, as if it had become uncertain. Finally, on April 16, it will pause entirely. Then, for almost 11 weeks, it will reverse its course in the heavens and move backward against the star background — toward the west. On June 30, it will pause again, before resuming its normal eastward trek.

The Greeks were stumped

All the planets exhibit this "retrograde motion" at one time or another, but for the longest time, ancient astronomers were unable to come up with a satisfactory explanation for it. For one thing, while behaving in this strange manner, Mars will also appear to deviate somewhat from its normal course; the retrograde motion will appear to bring it to a place that's noticeably below its regular orbital track. In other words, for those people watching from Earth, Mars will appear to travel along a zigzag path. Yet, the Greeks staunchly believed that the sun, moon and planets all moved around the earth in perfect circles. They had great difficulty explaining and calculating why Mars mysteriously seemed to "zig" on a westerly course for more than two months, then abruptly "zag" back on its "normal," eastward course. For a long time they had no adequate explanation for it.

The Greeks finally explained away this anomaly by asserting that the planets moved around Earth in smaller "epicycles" — that is, a small circle whose center moves along its main orbital path around Earth, resulting in complex, almost coil-like curves. Unfortunately, the actual observations of the planets never seemed to fit this strange orbital mechanism, ultimately making the Greeks' explanation quite useless.

Copernicus figured it out!

In 1543 the great Polish astronomer Nicolaus Copernicus (1473-1543) had his lifelong work "De revolutionibus" published; only then was the secret of the odd retrograde loops finally revealed. By demoting the Earth from its hallowed position at the center of the Solar System and replacing that center with the sun, he was able to triumphantly explain the riddle of the apparent "backwards motion effect" of the planets.

It's easy to understand why Mars will chart this odd path in the sky if you remember that the Earth is nearer to the sun than Mars is, and is therefore circling around it toward the east faster than the Red Planet. At the end of May, Earth will overtake Mars, passing between it and the sun, and will move on ahead, leaving Mars behind. While we're in the midst of passing it, the planet will seem to move backward toward the west, just as a slower car seems to drop behind when it is viewed from a faster one on a highway. With the right perspective, it's simple to understand, yet the apparently backward paths of the planets confused the wisest men for centuries until Copernicus provided the correct explanation. [The Greatest Astronomers of All Time]

One thing I think I should stress here: Mars is not really stopping or reversing its course in space!

What we are seeing is merely an illusion based on perspective. Mars will always continue to move along in its regular elliptical orbit around the sun. What we are seeing — the stopping, reversing of its path in the sky and the ultimate resumption of its regular journey — is merely a function of the view people have of Mars as it is seen from Earth, as each planet travels around the sun in separate paths and at different speeds.

Editor's note: If you capture an awesome view of Mars and want to share it Space.com and our news partners for a story or gallery, send images and comments in to managing editor Tariq Malik at: spacephotos@space.com.

Joe Rao serves as an instructor and guest lecturer at New York's Hayden Planetarium. He writes about astronomy for Natural History magazine, the Farmer's Almanac and other publications, and he is also an on-camera meteorologist for News 12 Westchester, N.Y. Follow us@Spacedotcom, Facebook and Google+. Original article on Space.com.