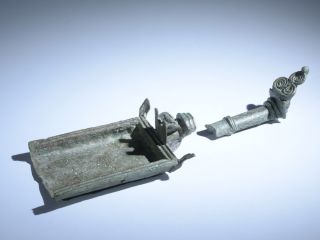 A bronze shovel unearthed in Israel may have been used over 2,000 years ago in ritual sacrifices at the Jewish temple.
(Image: © IAA)

An ancient bronze shovel that may have been used in Jewish cultic rituals has been unearthed in Israel.

The 2,000-year-old shovel, which was unearthed near the Sea of Galilee, is similar to others used by ancient priests in the Second Temple period.

"The incense shovel that was found is one of ten others that are known in the country from the Second Temple period. From early research in the world it was thought that the incense shovel was only used for ritual purposes, care for the embers and incense that were burnt in ritual ceremonies," Dina Avshalom-Gorni, the chief archaeologist with the Israel Antiquities Authority, said in an email statement.

The team believes the holy implements were kept in the storeroom of a Jewish family, until they were unearthed by the team 2,000 years later. [See Images of the Sacred Shovel]

The shovel, known as a mahta in Hebrew, is an ornate, engraved bronze implement that Jewish priests likely used to move incense coals used in religious rituals. For instance, in the Old Testament, these sacred implements are described in Exodus 27:1-3 as required tools for making burnt offerings.

Religious relic or everyday use

In recent years, archaeologists have uncovered other mahtas that were probably used in ordinary, day-to-day tasks.

The bronze shovel was uncovered along with a bronze jug on the floor of a 2,000-year-old storehouse near the ancient settlement of Magdala. While it's not clear whether the implement was actually used in religious rites or simply for raking coals for more humdrum fires, one possibility is that the shovel was a religious relic that was prized as a family treasure and kept for years in the storeroom, Avshalom-Gorni said in a video about the find.

Magdala was once a large port town where fish were salted. Jewish sources mention the city as a military base used in rebellions against the Romans, while according to Christian historical texts the town is the birthplace of Mary Magdalene, perhaps the most famous of Jesus' disciples.

Excavations at Magdala have revealed ritual baths, or mikvehs, a marketplace, and an ancient synagogue.