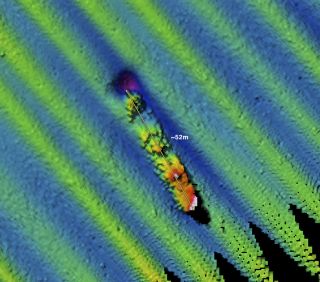 A NOAA/Fugro multibeam sonar survey of the area around Farallon Islands detected a probable shipwreck in September 2009, later identified as the missing USS Conestoga.
(Image: © NOAA/Fugro)

The disappearance of the U.S. Navy tugboat USS Conestoga 95 years ago has stymied experts for nearly a century. But a collaboration between government agencies finally solved the mystery of the vanished vessel.

The tugboat and its crew of 56 officers and sailors were last seen on March 25, 1921, when the Conestoga departed Mare Island Naval Shipyard in California on its way to American Samoa. The boat failed to reach its destination. And months of hunting for wreckage or remains turned up nothing more than a single battered lifeboat off the coast of Mexico. On June 30, 1921, the Navy officially ended the search, declaring the ship and crew to be lost.

But yesterday (March 23), the location of the Conestoga finally came to light. The National Oceanic and Atmospheric Administration (NOAA) and the U.S. Navy announced in a statement that they had identified the missing tugboat — as a shipwreck detected by a 2009 sonar survey in waters near San Francisco. [See Photos of the Search and Recovery of the USS Conestoga Shipwreck]

"One of the Largest and Most Powerful Tugs"

Launched on Nov. 12, 1903, the Conestoga was hailed in a Nov. 13 headline in the Baltimore American as "One of the Largest and Most Powerful Tugs on [the] Atlantic Coast." Originally a civilian tugboat, the Conestogawas bought by the U.S. Navy in 1917 and used for transporting guns and supplies during World War I; it was reclassified as the USS Conestoga in 1920.

When it vanished in 1921, the U.S. Navy conducted an extensive air and sea search that covered more than 300,000 square miles (776,996 square kilometers), the largest search undergone in the 20th century until the investigation for the missing aviator Amelia Earhart in 1937.

But their efforts went unrewarded, and the wreckage and crew remained missing. After the search was suspended, for 95 years the disappearance of the USS Conestoga stood as one of the top 10 unsolved shipwreck mysteries of all time, according to a NOAA statement.

Then in 2009, sonar readings during a NOAA hydrographic survey — which are conducted to measure and describe ocean features — detected what appeared to be an uncharted shipwreck with an estimated length of 170 feet (52 meters) at a depth of 185 feet (56.5 m) in waters near the Farallon Islands, off the San Francisco coast. [In Photos: Sunken Ships Lurk Near San Francisco]

A NOAA report described the find as "the wreck of an unknown vessel of late 19th or early 20th century vintage in Greater Farallones National Marine Sanctuary."

Over the next several years, NOAA researchers, Navy officials and other experts conducted a series of investigations to determine the identity of the sunken ship.

NOAA's scientists deployed remotely operated vehicles (ROVs) mounted with video cameras to investigate the wreck, and they revealed a vessel that was mostly intact, though parts of the wooden deck had collapsed. Marine wildlife — eels, lingcod and several rockfish species — swam through the sunken structure, and the exterior was  covered with the waving fronds of white anemones.

But underneath the anemones and behind the wreck's deep-sea inhabitants were a number of features that helped NOAA researchers verify Conestoga's identify. They consulted plans and a description of the tugboat's layout published in the trade journal Marine Engineering in 1904, and found matches to the preserved wreck in its overall size, the design of its propeller, and the location and number of its portholes. A 50-caliber naval gun mounted on the main deck was another key element confirming that they'd found the long-lost vessel.

Manson Brown, assistant secretary of commerce for environmental observation and prediction and a deputy NOAA administrator, expressed hope that the discovery would finally bring comfort and closure to the families of the Conestoga crewmembers who were lost when the ship sank.

"We look forward to working with the Navy to protect this historic shipwreck and honor the crew who paid the ultimate price for their service to the country," Brown said in the statement.