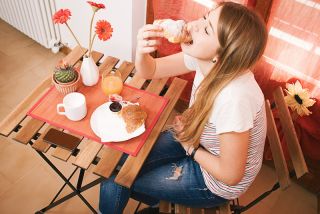 What are millennials eating for breakfast? Some are dissing cereal.
(Image: © SteLuk / Shutterstock.com)

Millennials may not be eating cereal, but it's not because they're lazy.

Internet outrage erupted last week after a New York Times food column on cereal reported that 40 percent of millennials said cereal is an inconvenient food because it requites cleanup after eating. A Washington Post column zoomed in on that tidbit to decry a "national trend toward laziness," including the use of coffee pods and parents who don't assign their children chores.

In reality, the Froot Loops may not be falling. Overall, only 6 percent of all consumers say they're eating less cereal than the year before, according to the same Mintel marketing report that included the 40 percent statistic. And the report did not directly link millennials' feelings about convenience with declines in cereal consumption. Cereal sales are falling, but for reasons associated with carb avoidance as well as convenience, analysts agree. And, according to the research firm Nielsen, other pre-made breakfasts, particularly the breakfast sandwich, are growing in popularity. [7 Personality Features That Are Bad for You]

The Mintel report, released in August 2015, drew its data from a survey of 1,912 Internet users ages 18 or older in the United States who eat cold or hot cereal. These participants were asked, "Which of the following statements about cold or hot cereal do you agree with?" One option was "Cereal is inconvenient because I have to clean dishes after preparing it."

And comparing the generational numbers might be misleading. When researchers study changes between generations, the most accurate way to do so involves comparing one generation to another at the same age — in other words, comparing baby boomer 18-year-olds to millennial 18-year-olds. This kind of academic research is based on long-running surveys that have been administered in high schools since the 1970s. Comparing today's 20-year-olds to today's 70-year-olds introduces all sorts of variables, like time spent at work, that might influence a person's feelings toward convenience food.

"The work-ethic decline is real," said Jean Twenge, the author of  "Generation Me: Why Today's Young Americans Are More Confident, Assertive, Entitled — and More Miserable Than Ever Before" (Free Press, 2007).

Those data fall in line with the notion that millennials are too lazy to pick up a sponge. But slothfulness may not be the reason for the decline in work ethic. Millennials are also more likely than generations before to say that work is nothing more than a living and that they don't expect to make work the center of their lives, Twenge told Live Science. The reason could be anything from an increase in entitlement to economic factors, reduced company loyalty toward employees or lessons learned from watching their parents' work experiences.

"It's likely all or most of these, and that's more difficult to determine," Twenge said.