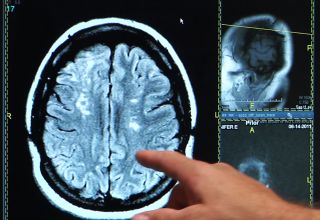 About every 40 seconds, someone has a stroke in the United States, according to the U.S. Center for Disease Control and Prevention — and from the moment the first symptoms occur, the clock is ticking.

Medical professionals refer to the first 3 hours after the onset of a stroke as the "golden window." Those who receive medical treatment within those first 3 hours stand a much better chance of living and avoiding permanent injury from a stroke than those who don't.

What you don't know could kill you

During a stroke, blood supply to the brain is interrupted , either by blocked arteries or because a blood vessel within the brain ruptures. Without a continuous supply of oxygen and nutrients, brain cells begin to die rapidly, and without immediate medical attention, the damage can be extensive and permanent, and ultimately fatal.

While physicians know certain risk factors — like high blood pressure, smoking and high cholesterol — increase stroke risk, the truth is, we simply cannot predict exactly who will have one. According to the CDC, of the nearly 800,000 strokes that will occur this year, 3 out of 4 will be first-time strokes, meaning it will be a new, frightening experience for those patients.

Our best hope is that people know the early warning signs of a stroke and act immediately if they, or someone around them, is having one.

Unfortunately, this is a message many people, especially younger people, aren't getting. A new national survey commissioned by my colleagues and I at Ronald Reagan UCLA Medical Center found that people under age 45 often underestimate the symptoms of a stroke and the urgency to seek medical help.

Knowing what you don't know

In our research, we asked more than a thousand people across the United States what they would be likely to do within the first 3 hours of experiencing numbness, weakness, or difficulty speaking or seeing, which are all common symptoms of a stroke.

That delay is not only disturbing; it could prove deadly.

Many younger people assume strokes occur only in the elderly, dismissing the telling stroke symptoms. While strokes may be more common as people age, people of all ages can experience them.

The risks are real

The truth is, anyone, even younger people, can be at risk for stroke, especially with obesity rates at an all-time high. Not only are Americans heavier, but we're dealing with diseases like diabetes much earlier in life.

Moreover, people with diabetes are one and a half times more likely to have a stroke than those who don't have the condition, and since 1990, the rate of diabetes in people younger than 44 has skyrocketed by 217 percent, according to the CDC.

High blood pressure, or hypertension, is another important risk factor for stroke, and today, it affects about 70 million people, including 1 in 4 men ages 35 to 44. [Hypertension: Symptoms and Treatment]

Given those numbers, it's clear that many people under age 45 have risk factors for stroke, and according to a recent study published by the American Academy of Neurology, strokes in younger patients are on the rise. The study found that between 1995 and 2008, the number of strokes in people between the ages of 15 and 44 increased by as much as 53 percent.

Most strokes can be treated

Regardless of a patient's age, most strokes (about 85 percent) are ischemic strokes, in which an artery that carries blood to the brain becomes blocked, usually by a clot. Without normal blood flow, the brain is robbed of oxygen — and the longer it goes without oxygen, the more it's damaged.

If patients arrive at the hospital soon enough, doctors can give them drugs called tissue plasminogen activators (tPA) to break up the clots and restore blood flow. In some cases, surgery is necessary. If the clot is in a carotid artery — the large arteries on the sides of the neck — we may need to perform a carotid endarterectomy to remove plaque from the artery, or angioplasty, in which we use a balloon to widen the artery (and often insert a stent to keep it open and restore unrestricted blood flow).

We also perform surgery for hemorrhagic strokes, which occur when an artery in the brain ruptures or leaks blood directly into the brain.

The good news is, there are treatment options for stroke. The bad news is, unless you know what to look for and get medical attention immediately, doctors may never have the chance to help.

The American Heart Association has an easy way for you to remember the early warning signs of a stroke so that you can act "F.A.S.T." Check for the following signs:

Face drooping. Ask the person to smile, and see if their smile seems crooked. Arm weakness. Ask if one arm is numb or weak, and have them raise both arms to check their strength. Speech difficulty. Is the person slurring their speech or speaking incoherently? Time to call 9-1-1. Call immediately, and note the time you first noticed the symptoms.

It's natural for younger people to be inclined to think that symptoms of a stroke are likely due to something else. Unfortunately, those cardinal signs of stroke are the only trigger or alert that we have to implement prompt diagnosis, and importantly, effective treatments.

Given the results of this survey, it's clear we need to do a better job of making all patients aware of the signs of a stroke and the urgency to seek treatment before it's too late.