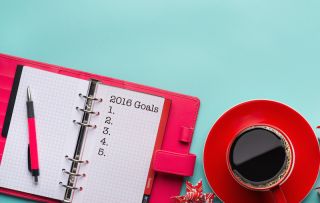 If you normally have trouble sticking to your New Year's resolutions, a new study may help: Psychologists have found that asking questions and then answering them, instead of making statements, is one key to sticking with your promises.

For example, you are more likely to actually exercise more if you ask yourself "Will I exercise more?" and then say, "Yes," instead of just telling yourself "I will exercise more." The researchers found that people tend to be more successful in changing their behaviors when they pose their goals as questions instead of statements, according to the study.

In the study, the researchers analyzed the results of 104 previous studies done over about eight years. The studies were looking into this effect of asking questions in a variety of contexts, such as eating healthier or going out to vote. Most of the analyzed studies found that questions, particularly questions with a yes or no answer, tended to be stronger behavior influencers than statements were. [7 Ways to Have a Happy New Year]

In most of the studies, the participants were questioned by another person, and only had to answer the question, said Eric Spangenberg, co-author on the paper and professor of marketing and psychology at the University of California, Irvine. However, there were also studies that looked at people who used self-questioning, and the researchers determine that this technique was also effective.

"One of the things people suggest is that maybe you could team up with a friend," when setting New Year's resolutions, he said. "It has the added benefit of making the commitment somewhat public." Committing to something in public makes people more likely to engage in the behavior, he told Live Science.

Although psychologists don't know exactly why questions are better at influencing behavior change than statements, Spangenberg speculated that questioning creates a type of pressure to follow through, or a sense of obligation, discomfort or guilt, and that helps motivates behavior change.

The researchers said they suspect that the reason yes or no questions tended to be more effective was because they were more definitive — you either are or are not going to exercise more in the future. However, Spangenberg said, that questions designed to influence behavior didn't have to be yes or no questions to affect a change in behavior. Spangenberg and his colleagues also noted that while questions are generally more effective at changing behaviors, the effect is strongest when the questions encourage behaviors that are considered "social norms," such as recycling or working out regularly.

Other research has suggested that making just a few resolutions, instead of a whole slew, keeping a diary about your progress and making up your mind to persevere even if you slip up can also help.

The study suggests that if you're trying to change for the better this coming year, grab a friend and ask each other some yes or no questions, which will help you both to stick to your guns.

The findings were published in the Journal of Consumer Psychology on Dec 28.