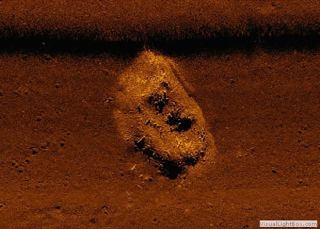 A seafloor image of the shipwreck that the Colombian government has identified as the San Jose.
(Image: © Colombian Ministry of Culture and the Colombian Institute of Anthropology and History)

The president of Colombia's Dec. 5 announcement that a 300-year-old Spanish shipwreck had been discovered made headlines around the world, largely because of the price tag attached to the wreck: somewhere between $4 billion and $17 billion.

The galleon, named the San José, was carrying a large load of gold, silver and precious stones from the mines of Peru back to Spain in 1708 when it was destroyed in a sea battle with the English. The sinking occurred against the backdrop of the War of the Spanish Succession, a European conflict that arose over the disputed successor to the Spanish throne.

According to the Colombian government, a naval and archaeological expedition discovered the wreck of the San José off the country's coast on Nov. 27. Quickly, other parties came forward to make rival claims on the ship, including a U.S. salvage firm that claims to have located the wreckage decades ago, as well as the government of Spain. [In Photos: San Jose Treasure Ship Found]

Treasure brings out rival claimants, said Justin Leidwanger, an archaeologist at Stanford University who studies ancient shipwrecks in the Mediterranean. But there is another factor at play with the San José, he told Live Science: Some 600 men went down with the ship, so the San José is a war grave.

"It makes it very touchy because one is not supposed to intervene in war graves," Leidwanger said. "Can you pluck treasure off the seabed without disturbing a war grave? I doubt you can. But these are the sort of discussions that will be had."

A ship with tales to tell

In 1708, Europe was at war. The prior king of Spain, Charles II, was notoriously inbred and died without heirs. He named his grand-nephew Philip, Duke of Anjou, his successor. The problem was that Philip was the grandson of French King Louis XIV. Thus, crowning Philip as king of Spain would unite Spain and France — a possibility that frightened the rest of Europe. War erupted to prevent this eventuality. And because of European colonialism, this war had a long reach. The San José, far across the Atlantic, was carrying cargo meant to fund the French and Spanish war effort.

Thus, the discovery of the San José's wreck could answer historical questions about what it was like to fight at the fringes of this war, Leidwanger said. [Disasters at Sea: 6 Deadliest Shipwrecks]

Indeed, the potential riches aboard the San José aren't what excites archaeologists. Shipwrecks contain all sorts of information about the daily life of the people who manned the vessels, said Frederick "Fritz" Hanselmann, an underwater archaeologist at Texas State University. Coins onboard can help scientists date an unknown wreck, and ceramics and jars can be traced back to their manufacturers, he said.

The Colombian government has released little information on how the wreck of the San José was identified, other than by its cannons. However, the historical information about where the San José went down makes it likely that the identification is correct, Leidwanger said.

Archaeologists often turn to ingenious methods to identify downed ships. Hanselmann was involved in the study of a shipwreck off the coast of the Dominican Republic thought to be the Cara Merchant, a ship captured and then abandoned by Capt. William Kidd in 1689. Analysis of the wood in the ship's hull revealed that it was made of teak, which, at the time, came only from India and southeast Asia. The ballast stones in the ship came from the Deccan Traps, a volcanic landmark in India. The clues all pointed to the Cara Merchant, an Indian vessel.

What will happen to the San José and its treasure remains an open question. Colombia has declared its intention to study the wreck and create a museum. The U.S. salvage firm Sea Search Armada claims that it is owed half the treasure aboard, despite Colombian court decisions' denial of this claim. (The firm partnered with the Colombian government in 1981 and claims to have identified the wreckage then. However, Colombia now says the new discovery is at a location never identified before.)

Meanwhile, the UNESCO Convention on the Protection of the Underwater Cultural Heritage holds that military shipwrecks belong to their country of origin, regardless of where they went down. German U-boats that sunk off the coast of the United States during World War II, for example, still belong to Germany, Leidwanger said. Spain has already claimed rights to the San José, which was a Spanish military vessel sunk in an act of war, according to the Spanish foreign minister.

However, Colombia is not a signatory of the UNESCO convention, Leidwanger said, so it's unclear how the country will respond to this claim. A 2013 law in Colombia declared wrecks found in its waters as its own national heritage.

Whatever the outcome, the human tragedy at the center of the San José wreck shouldn't be lost amid visions of silver and gold, Leidwanger and Hanselmann said.

"There was a significant loss of life in the sinking of the San José, just like there was in the Titanic, or the USS Arizona," Hanselmann said.