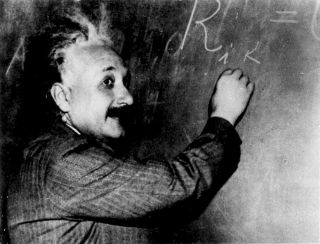 Name the smartest person ever. Chances are high that the name Albert Einstein popped into your head. For the past century, Einstein has endured as a public symbol of intelligence and inspiration.

Now, on the 100th anniversary of what is arguably Einstein's greatest accomplishment — the publication of his theory of general relativity — PBS and Nova are celebrating his work and giving viewers insights into the man behind the theory. The show, dubbed "Inside Einstein's Mind," is a 1-hour special that will air on Wednesday (Nov. 25) on PBS at 9 p.m. EST/8 p.m. CST (check local listings).

"Inside Einstein's Mind" guides viewers through the life and thought processes that led Einstein to publish his theory. One fact that might surprise viewers is that Einstein's genius didn't come in a flash of inspiration. Instead, it was years of hard work that brought Einstein to his understanding of the universe. [Creative Genius: The World's Greatest Minds]

"Einstein's genius is that he really knew how to think hard," said Sylvester James Gates, a professor of physics at the University of Maryland and one of the many experts featured on the show.

It took Einstein nearly a decade to finally perfect his theory, Gates said. "Oftentimes in movies, you see portrayals of science — they start thinking one year, then a couple months later they've got an answer. That's just not the way it works in the real world," he added.

Luckily, viewers won't have to toil away for years in order to understand these tricky topics, because the show uses special effects, interviews with experts and physicists, and thought experiments to show how Einstein worked through questions — questions like "What would it look like to ride a light beam?" Or, "Is time the same for everyone?" Or, "What is gravity?"

General relativity is a theory in physics that describes how gravity works. It's an advanced version of Einstein's earlier theory of special relativity, which explains the relationship between space and time (and spawned his famous E=mc^2 equation). General relativity incorporates gravity into this framework. The theory helps explain how the universe works and is still applied in scientific discoveries, ideas and inventions today — ranging from studies of black holes and the Big Bang to the GPS in your cellphone.

The show also introduces biographical elements of Einstein's life, such as his sometimes-strained relationship with his family and his move to the United States in the 1930s.

"[Albert Einstein was] a person, full of flaws and imperfections," Gates said. Though it doesn't dwell on them, the show highlights the many roadblocks, from both society and Einstein himself, that threatened to keep the scientist from publishing the theory of relativity.

"And yet," Gates said, "there's also this other part of him that established a way for humanity to answer one of our most fundamental questions" — namely, what is this place — this universe that humans live in — and how does it work?

Viewers who want to know more can find details and links to other materials on the show's website at PBS.org.