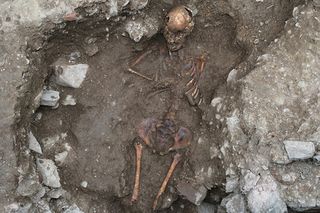 Italian archaeologists have unearthed the remains of a Medieval teenage girl who was burnt and thrown carelessly in a pit, her grave covered with heavy stone slabs.

Her burial shows she was seen as a danger even when dead, according to the archaeologists.

The skeleton was discovered at the complex of San Calocero in Albenga on the Ligurian Riviera, by a team led by scientific director Philippe Pergola, professor of topography of the Orbis Christianus Antiquus at the Pontifical Institute of Archaeology at the Vatican.

At the same location, in September 2014, the team unearthed the remains of another “witch girl,” a 13-year-old female who was buried face-down.

Like other deviant burials, in which the dead were buried with a brick in the mouth, nailed or staked to the ground, or even decapitated and dismembered, both the face-down burial and the stone-covered tomb aimed at preventing the dead girls from rising from the grave.

Further analysis determined the “witch girl” who was buried face-down just suffered from scurvy, a disorder caused by an insufficient intake of vitamin C.

It is unlikely the two witch girls are related. While the first girl died between the first half of 1400 and the beginning of 1500, the newly found skeleton is likely older, the archaeologists say.

“We are waiting for the radiocarbon dating results. At the moment we can date the burial between the 9th and the 15th century,” said archaeologist Stefano Roascio, the excavation director.

Standing just 4.75 feet tall, the girl was 15-17 years old when she died. She was burnt in an unknown location and then brought to the San Calocero site where she was hastily buried.

“We can’t say whether she was alive or not when she was burnt. Fire attacked her body when soft tissues were still present, so it could have occurred before death or soon after,” anthropologist Elena Dellù told Discovery News.

The girl was hurriedly interred, with only heavy stones thrown over her grave.

“She was taken by her elbows and just thrown in the pit. Her head leaned on the vertical wall of the pit, so that it was bent. Indeed, her chin almost touched the breastbone,” Dellù said.

Preliminary analysis revealed porotic hyperostosis on the skull and orbits. These are areas of spongy or porous bone tissue and are the result of severe iron deficiency anemia.

Enamel hypoplasia, a condition in which enamel becomes weak, was also present and pointed to childhood stresses such as malnutrition.

Her pallor, her possible hematomas and fainting might have scared the community.

The condition appear similar to that of the first “witch girl” who was diagnosed with scurvy on the basis of porotic hyperostosis found in crucial points. The spongy areas were present on the external surface of the occipital bone, on the orbital roofs, near the dental sockets and on the palate, and on the greater wings of the sphenoid.

“Unfortunately the skeleton of the second girl is damaged right in those bones where scurvy can be diagnosed. However, we cannot rule it out completely given theporotic hyperostosis on the skull,” Dellù said.

The excavation, which is currently funded by private foundations (Fondazione Nino Lamboglia of Rome and Fondazione bancaria De Mari of Savona) will continue in 2016.

“At the end of the digging campaign we will focus on specific analysis. If the radiocarbon dating shows the two girls are from the same period, we will try to compare their DNA,” Dellù said.