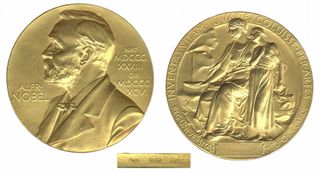 In 1963, a British biophysicist won a shiny Nobel Prize medal for discovering how the nerve cells of squid generate an electrical pulse when stimulated. His hard-earned hunk of gold recently sold at auction for nearly $800,000.

The Nobel Prize medal, sold by Nate D. Sanders Auctions in Los Angeles, belonged to Alan Lloyd Hodgkin, who helped pioneer research on the central nervous system. Hodgkin was awarded the prize in physiology or medicine along with his colleagues Andrew Fielding Huxley and John Eccles. The laureates conducted their research on the giant axon of squid because these animals have a single thick axon that was easy to manipulate with the scientific tools of the time. But the scientists' work helped explain how the central nervous systems of most animals function.

Specifically, Hodgkin and his colleagues discovered the chemical processes that occur in cells that allow the passage of electrical impulses along individual nerve fibers. These electrical impulses, or "action potentials," as Hodgkin and Huxley dubbed them (Eccles was involved with different, but complementary, research from that of his fellow laureates), are what enable a central nervous system to coordinate an organism's activities. [Creative Genius: The World's Greatest Minds]

Hodgkin died in 1998 in Cambridge, England, where he had long served as a professor in the physiology department at Trinity College, Cambridge.

The laureate's 23-karat-gold prize medal was auctioned off on Oct. 29, alongside a few related pieces of memorabilia. The other items included a New York Times clipping from 1963 that details the scientist's award-winning research, and photographs of Hodgkin from the 1963 Nobel Prize ceremony in Oslo, Norway.

While the $795,614 that Hodgkin's medal brought in at auction is no small sum, this price pales in comparison to the $4.76 million paid by the bidder who took home James Watson's Nobel Prize in Physiology or Medicine in 2014.  Watson, who was awarded his Nobel Prize in 1962, is one of the scientists credited with discovering the structure of DNA.

However, Hodgkin's medal was the most expensive one to sell so far this year. Five other Nobel Prize medals have been auctioned off in 2015. The cheapest, Simon Kuznets' 1971 Nobel Prize in economics, went for just under $400,000.

The first-ever Nobel Prize medal to be sold at auction belonged to William Randal Cremer, who won the Peace Prize in 1903. Sold in 1985, the prestigious award garnered $17,000 at auction.

Editor's Note: This story was updated to correct a statement about the research conducted by Hodgkin and his colleagues. The scientists conducted their research using the giant axons of normal-sized squid — not axons from giant squid, as the article originally stated.