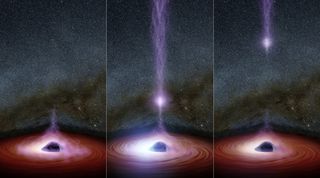 Illustrations show how a corona, a shifting feature, can generate a flare of X-rays around a black hole. Image released Oct. 27, 2015.
(Image: © NASA/JPL-Caltech/ESA/DLR/FU Berlin/MSSS)

Astronomers are dragging the inner workings of black holes out into the light.

The powerful X-ray flares seen erupting from supermassive black holes are tied to the motion of these behemoths' surrounding "coronas," mysterious features that are sources of high-energy light, a new study suggests.

Specifically, supermassive black holes likely flare when their coronas launch away from them, researchers said. [Images: Black Holes of the Universe]

"This is the first time we have been able to link the launching of the corona to a flare," study lead author Dan Wilkins, of Saint Mary's University in Halifax, Canada, said in a statement. "This will help us understand how supermassive black holes power some of the brightest objects in the universe."

No light escapes from black holes themselves, but many of these objects are surrounded by an "accretion disk" of fast-moving, superheated material that emits light in various wavelengths.

Supermassive black holes lurk at the heart of most (if not all) galaxies, including Earth's own Milky Way. These monsters can contain as much mass as hundreds of millions, or even billions, of suns.

Wilkins and his team studied a supermassive black hole called Markarian 335 (Mrk 335), which is found 324 million light-years away from Earth. In September 2014, NASA's Swift satellite detected a bright flare coming from Mrk 335; the astronomers asked NASA to focus its NuSTAR (Nuclear Spectroscopic Telescope Array) spacecraft on the object to study it further in X-ray light.

Using these various observations, the study team determined that Mrk 335's corona launched away from the black hole at about 20 percent the speed of light, and then eventually collapsed.

"The corona gathered inward at first and then launched upwards like a jet," Wilkins said. "We still don't know how jets in black holes form, but it's an exciting possibility that this black hole's corona was beginning to form the base of a jet before it collapsed."

The new results also suggest that coronas are relatively compact rather than diffuse, as some researchers have posited, study team members said.

"The nature of the energetic source of X-rays we call the corona is mysterious, but now with the ability to see dramatic changes like this, we are getting clues about its size and structure," NuSTAR principal investigator Fiona Harrison, who's based at the California Institute of Technology in Pasadena, said in the same statement.

Harrison is not affiliated with the new study, which was published in the journal Monthly Notices of the Royal Astronomical Society.