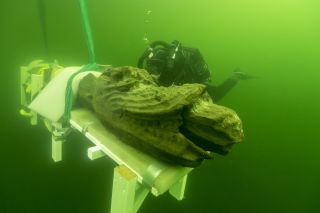 Divers recently retrieved the monster-headed figurehead of a Danish warship known as the "Gribshunden," or "grip dog," that sank beneath the waves in 1495 off the coast of Sweden. The ship may be the only preserved warship from the time period.
(Image: © Foto Ingemar Lundgren, Ocean Discovery)

A sea monster that lay hidden beneath the waves for five centuries has finally been recovered from the Baltic Sea.

The "monster" — a ship figurehead that may show a scowling dog or perhaps a fantastical sea dragon with a helpless human clutched in its jaws — was fixed atop the Gribshunden, a vessel that last sailed in 1495.

"I think it's some kind of fantasy animal — a dragon with lion ears and crocodilelike mouth," Johan Ronnby, a professor of marine archaeology at Södertörn University in Sweden, who recovered the figurehead, told BBC News."And there seems to be something in his mouth. There seems to be a person in its mouth, and he's eating somebody.'' [See Images of the "Grip Dog" Ship's Monstrous Figurehead]

The sunken ship could provide an unprecedented look at how warships were made at that pivotal time in world history.

"What is unique is that there are no other warships from this time in the world," said Marcus Sandekjer, the director of the Blekinge Museum in Karlskrona, Sweden, where the figurehead is being kept.

The Gribshunden, or the "Grip Dog," could even provide clues to the construction of the ships that Christopher Columbus used to sail to North America, he added.

The team isn't quite sure what a "grip dog" is. In Danish, "Gribshunden" is a combination of the words for a griffon — a mythical Greek creature that is part lion, part bird — and a dog or hound.

Either way, the Gribshunden was the flagship of King Hans of Denmark's naval fleet. In 1495, the king was sailing on the Gribshunden to the southeastern Swedish city of Kalmar, where he planned to negotiate a political union between the Scandinavian countries. But partway through the journey, while King Hans was off the boat visiting the nearby port of Ronneby in what is now Sweden (then Denmark), the Gribshunden caught fire and sank. An eyewitness account from a Danish nobleman who escaped the wreckage describes a terrible conflagration in which "many knights and poor men burned to death," Sandekjer said.

Divers first discovered the wreck in the 1970s, but scientists identified the ship in 2013, only after two excavations in 2007 and 2011 to analyze the wood. Earlier this week (Aug. 11), divers managed to heave the monstrous figurehead from the frigid waters. It is now sitting in a bath of water at the Blekinge Museum. Researchers hope to restore it and then put it on display at the museum.

The forbidding face of the Gribshunden likely would have struck fear in enemies who encountered it: From nose to end, it spans 11.1 feet (3.4 meters). It would have been the terrifying face of an imposing warship that was up to 100 feet (30 m) long and held 150 seamen.

Such ornate figureheads served several purposes: They helped people in preliterate societies identify a ship at a glance. And in Viking culture, dragons and other monsters carved into figureheads were used to ward off evil spirits that were thought to attack on a hazardous ocean voyage, according to the British Museum. In this case, it's also possible that the human head wedged in the monster's jaws could represent the Biblical story of Jonah and the whale (or sea monster), Sandekjer said.

The building of the Gribshunden was an international project. The timbers hailed from northern France and were felled sometime between 1482 and 1483, analysis of the tree rings suggests. The ship itself was likely constructed in Flanders or in the Netherlands, he said.

The Gribshunden is unusual in that it is still in near-pristine condition. Most ocean shipwrecks have been eaten away by sea worms or degraded by the salty water, but the Baltic has less saline waters and no shipworms to ravage the boats, Sandekjer said.