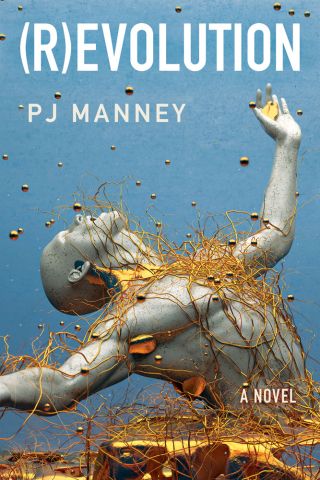 PJ Manney is the author of "(R)EVOLUTION" (47 North, 2015). She is a former chairperson of Humanity+, and a frequent guest host and guest on podcasts including The World Transformed. Manney has worked in motion-picture public relations at Walt Disney/Touchstone Pictures; story development and production for independent film production companies for such films as "Hook" and "Universal Soldier;" and writing for television for such shows as "Hercules - The Legendary Journeys," and "Xena: Warrior Princess." She also cofounded Uncharted Entertainment, writing and creating pilot scripts for television. She contributed this article to Live Science's Expert Voices: Op-Ed & Insights.

Excerpted from (R)EVOLUTION by P.J. Manney. Copyright 2015. Published by 47North. Used by permission of the publisher. Not for reprint without permission.

The sirens were getting louder. And her options fewer.

Her trainers were adamant: don't deviate from the plan. Slowly, she slipped the key into the lock. It turned easily. The door opened . . . Nothing happened. Maybe it was the ignition. She got behind the wheel, fastened her seat belt and gently put the key in the ignition. The car turned over, and the engine hummed. No white light came to extinguish her existence. She breathed a constrained sigh of relief through her mouthpiece and carefully backed out of the space, following the arrows to a far exit, turning right onto Paradise Road and immediately crossing over two lanes to make a left onto East Desert Inn Road, tires squealing below the suspended corridor created by the hulking convention center above her.

The sirens were close.

The authorities would close the largest arteries first, so Emma avoided Interstate 15 — the usual route through Las Vegas — to escape on surface streets and back roads. The plan was to meet up 150 miles away. Only she and Donovan would make it now.

Within ten blocks, traffic slowed. As the overpass for the 515/95/93 loomed before her, she saw it. A smoking hole in the asphalt at a stoplight, blocking a lane. People surrounded it, staring into its wet, inky blackness.

Traffic freed up after the overpass. Word of what happened had not yet reached the local drivers. She careened right, turning the corner of the first street she saw, Backstage Boulevard, and made a quick left on Florrie Avenue. She was in a residential neighborhood, full of one-story, 1960s ranch-style homes. She parked in front of a gray house with white trim peeling in large flakes from the relentless Las Vegas sun and left the keys in the ignition, in case removing the keys might trigger an explosion.

She bolted down the street, gasping for air. There wasn't enough. It could have been her weeping, or maybe her air filters had failed and she, too, was infected, but she couldn't stop. Through the fogged lenses of her goggles, she searched for an escape route. In one direction there was a dead end into railroad tracks. She dashed right into a cul-de-sac.

Suddenly, Emma felt as if her head might explode. Her ears rang and she experienced a sensation of her body being peeled inside out . . .

After the burst of blinding white light faded away, the center of the cul-de-sac had an oozing, tarry hole in it. Emma was gone.

It would be over six hours before a cruiser from the Las Vegas Police Department came to examine the hole after receiving a housewife's hysterical 911 call.