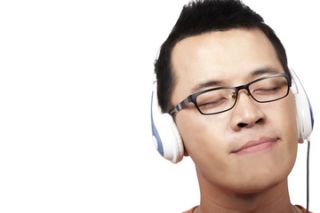 Naomi Eide is a master's student in the Philip Merrill College of Journalism at the University of Maryland, College Park. She contributed this article to Live Science's Expert Voices: Op-Ed & Insights.

Denny Gulick began playing piano at age 4. With perfect pitch and a knack for memorization, he was a natural.

When Gulick was 5, his father gave him math multiplication tables that extended up to 16, and taught him pi to 15 decimal places, something Gulick has never forgotten. His mind seemed equally adapted to music and math, a perfect harmony — though one did not necessarily influence the other. For the past 50 years, Gulick has been a math professor at the University of Maryland, and he has found many correlations between math and classical music.

"The connection is that — to my way of thinking, and I have thought about this for decades — there are patterns [in music], especially with Johann Sebastian Bach," Gulick said. "There are a lot of patterns, and mathematics has a lot of patterns. … In fact, mathematics is really about patterns."

Does music help math, or does math help music?

Musicians and scientists alike have attempted to find whether a person's musical talents benefit other aspects of that individual's life, such as the ability to focus. Though scientists have not precisely determined how, or if, music education and performance give a person increased skills in areas like math and science, researchers do know that musicians have some increased cognitive abilities.

"If you play a musical instrument, your brain shows changes," mainly in the motor and auditory cortices, said Nadine Gaab, the principal investigator at the Laboratories of Cognitive Neuroscience at Boston Children's Hospital. "Auditory, because you're using your ears a lot … and then motor because you're doing a lot of practice with your fingers and arms" requiring unique movements, Gaab said.

"It is unclear, to this stage, whether musicians have that because they are born with [it] and they are just really good with listening and doing certain finger movements and that's why there drawn to music," Gaab said. "Or it's the other way around, and music actually changes the brain? We don't know that yet." [Abstract Reasoning Enhanced by Music Study]

Robert Slevc, assistant professor in the psychology department at the University of Maryland, said that the correlations found between musical and mathematical abilities could come from many different factors, as studies are not created in a vacuum and other variables could influence the outcome.

"I think you could say there's evidence for relationships between musical experience, ability or interest, and various kinds of cognitive and social domains," Slevc said. "What those [relationships] mean, I think we don't yet know.

Slevc said that the association between performing music and having mathematical skills could mean, simply, "that smart people are good at things."

There are a lot of aspects of music that can be expressed mathematically, but musicians do not sit through a piece of music calculating its mathematical nuances or interval frequencies, Slevc said. Though a performer may understand intervals and time measurements in music, it does not mean he or she is automatically good at math, he said.

Similarly, while the laws of physics govern how a ball travels through the air, playing baseball doesn't make a person a scientist, Slevc said.

"We're all good at catching things, too, in ways that are quite complicated, but that doesn't necessarily make us good at physics," he said.

And yet, the differences are clear

Studies also have shown that children and adults with musical training have heightened skills in an area called executive functioning, Gaab said.

This involves the mental processes that allow brains to plan, focus attention, remember instruction and successfully juggle multiple tasks, according to the Center of the Developing Child at Harvard University.

Musicians are particularly good "at switching tasks quickly and switching rules quickly," said Gaab. However, this is another example of tricky correlation, as Gaab said there are no studies that look at executive functioning over time, determining whether such skills influence someone to become a musician, or whether music changes and enhances a person's executive functioning skills.

"Anytime you learn a new skill, that skill is represented in your brain in some way and can show up functionally, but can also show up structurally," Slevc said.

Areas of the brain can show a person's aptitude for certain skills, allowing scientists to physically observe a person's traits rather than just make psychological observations. These areas include grey matter, which comprises regions of the brain involved with muscle control, memory, emotions, speech and senses.

Though scientists do not know whether executive functioning skills influence someone to become a musician, some conclude that music education allows for increased cognitive performance.

Anita Collins, a professor at the University of Canberra specializing in neuroscience and music, said that music education makes any human being operate more effectively from a cognitive perspective, which means "the brains of musicians can learn faster, excel at more complex topics and think creatively about problems." Collins emphasized that musicians are more perceptive than others when they are listening to classical music, observing the nuances and intricacies involved with the repertoire. (You can see a TEDEd talk with Collins for more on the subject.)

"They process the music into understanding just like a nonmusician," said Collins. "But music education helps to refine that skill, [giving] descriptions and words to what we are hearing."

Though there might be a scientific explanation connecting music and one's neurological abilities, the true impact and results of having musical training is left for the musicians to decide. For some, like Drew Baden, the chair of the Department of Physics at the University of Maryland and a practicing pianist, music goes right to the brain and stimulates emotions, allowing people to feel the same things.

"Music is a great thing to connect science and psychology," Baden said. It connects "what it means to be alive, to be self aware and all alone in your skin."