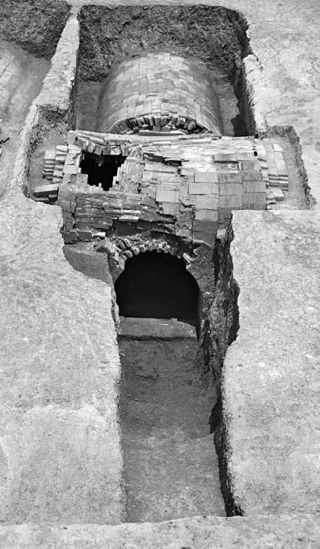 A brick tomb from the Ming Dynasty held gold treasures and the skeletal remains of a woman named Lady Mei. The tomb, with its vaulted roof, was excavated in 2008.
(Image: © Photo courtesy Chinese Cultural Relics)

A Ming Dynasty tomb containing gold treasures has been discovered at a construction site in Nanjing, China. However, the real treasures may be two stone epitaphs that tell the story of the person buried there — Lady Mei, a woman who went from being a concubine to becoming a political and military strategist.

The epitaphs, found inside the brick tomb, reveal that Lady Mei was a 21-year-old "unwashed and unkempt" woman who "called herself the survivor." Later she became the mother of a duke who ruled a province in southwest China. Lady Mei came to wield much power, providing her son with "strategies for bringing peace to the barbarian tribes and pacifying faraway lands," according to the epitaphs, which were translated from Chinese.

The treasures in her more than 500-year-old tomb include gold bracelets, a gold fragrance box and gold hairpins, all inlaid with a mix of gemstones, including sapphires, rubies and turquoise. [See Images of Lady Mei's Tomb and Gold Treasures]

Archaeologists from Nanjing Municipal Museum and the Jiangning District Museum of Nanjing City excavated the tomb in 2008, and their findings were recently translated into English and published in the journal Chinese Cultural Relics. Lady Mei's coffin was damaged by water, but her skeletal remains were found.

From "survivor" to "dowager duchess"

Researchers say that Lady Mei was one of three wives of Mu Bin, a Duke of Qian who ruled Yunnan, a province in southwest China on the country's frontier.

Born in 1430, she probably would have been about 15 years old when she married the duke, who would've been more than 30 years older than her, researchers say.

She probably didn't enjoy the same status as his other two wives. "Lady Mei was probably a concubine whom he married after he went to guard and rule Yunnan," wrote researchers in the journal article.

But while Lady Mei was a concubine, her own family appears to have had some wealth: Her great-great grandfather "Cheng" was a general who "won every battle" and was granted a fiefdom over "1,000 households," read the epitaphs.

Lady Mei's life changed when she gave birth to the duke's son, Mu Zong, who was 10 months old when the duke died. The newly widowed Lady Mei "was only 21 years of age. She was unwashed and unkempt, and called herself the survivor," the epitaphs say.

She took charge of Mu Zong's upbringing, grooming him to be the next duke.

"She raised the third-generation duke. She managed the family with strong discipline and diligence, and kept the internal domestic affairs in great order, and no one had any complaint," the epitaphs read.

Lady Mei "urged him to study hard mornings and evenings, and taught him loyalty and filial devotion, as well as services of duty."

When Mu Zong came of age, he and Lady Mei traveled to meet the emperor, who charged him with controlling Yunnan, the province his father had ruled. The emperor was pleased with Lady Mei and, sometime after the meeting, awarded her the title of "Dowager Duchess," according to the epitaphs. [Photos: Ancient Chinese Warriors Protect Emperor's Secret Tomb]

As Mu Zong began his rule over Yunnan, he relied on his mother for advice.

"Every morning when the third-generation duke got up, after taking care of official business, he returned to pay respect to the Dowager Duchess in the main hall," the epitaphs read.

"The Dowager Duchess would always talk to the third-generation duke about her loyalty to the emperor, and kind concerns for the people under the rule of the departed former duke, and strategies for bringing peace to the barbarian tribes and pacifying faraway lands."

Lady Mei died at age 45 in the year 1474. The epitaphs say that she passed away of illness in southern Yunnan and was brought to Nanjing for burial.

"On the day of her death, the people of Yunnan, military servicemen or civilians, old and young, all mourned and grieved for her as if their own parents had passed away," the epitaphs read.

"When the obituary reached the imperial court, the emperor sent out officials and ordered them to consecrate and prepare for the funeral and burial."

The epitaphs praise her role in nurturing the young duke and preparing him for the responsibilities of ruling Yunnan. "Using her love and her hard work, she raised and educated the child, and brought him up to be a man of ability and good moral character …" the epitaphs read.

"Why did heaven bestow all the virtues upon her, while being so ungenerous as not to give her more years to live?" the epitaphs ask. "Although the will of heaven is remote and profound, it needs to be spread among millions of people."

The team's report was initially published, in Chinese, in the journal Wenwu. The excavation crew chief was Haining Qi.