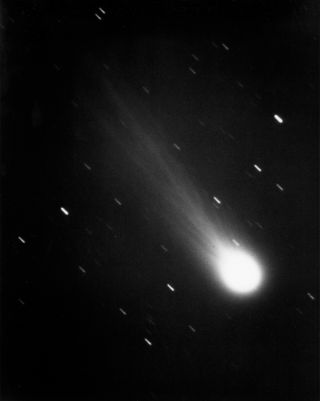 When asked to name a comet, most people will remember Halley's. Tonight (May 5), the Eta Aquarid meteor shower, produced by debris from Halley's Comet, will peak in the night sky, and you can watch live coverage of this Cinco de Mayo meteor shower online.

Late tonight (May 5) and during the early morning hours tomorrow (May 6), skywatchers will have a chance of sighting a few pieces of Halley's Comet – "comet litter," if you will – zipping through our atmosphere in the form of meteors. The online Slooh community observatory will host a free webcast of the shower starting at 8 p.m. EDT (0000 GMT) that will stream live at: http://www.slooh.com.

You can also watch the Eta Aquarid webcast live on Space.com, courtesy of Slooh.

When and Where to Watch

There are, however, two drawbacks if you plan to watch for these meteors this year. First, there is the moon, which was full on Sunday. Although it is now waning (losing illumination), it will still be a bright gibbous phase on the peak morning and will likely "muscle in" on the fainter meteor streaks by brightening the early morning sky with its light.

The other obstacle — at least for those watching from north of the equator — is that the radiant (the emanation point of these meteors) is at the "Water Jar" of the constellation Aquarius, which comes above the southeast horizon around 3 a.m. local daylight time, and never gets very high as seen from north temperate latitudes, so the actual observed rates are usually much lower than the oft-quoted 40 per hour. In North America, typical rates are 10 meteors per hour at 26-degrees north latitude, half this at 35-degrees latitude and practically zero north of 40 degrees.

For most skywatchers, the best hope is catching a glimpse of a meteor emerging from the radiant that will skim the atmosphere horizontally -- much like a bug skimming the side window of an automobile. Meteor watchers call such shooting stars "Earthgrazers." They leave colorful, long-lasting trails.

"These meteors are extremely long," said Robert Lunsford, of the International Meteor Organization. "They tend to hug the horizon rather than shooting overhead where most cameras are aimed."

Bill Cooke, a member of the Space Environments team at the Marshall Space Flight Center, said, "Earthgrazers are rarely numerous. But even if you only see a few, you're likely to remember them."

Meteor showers can be awesome night sky sights, but how well do you know your shooting star facts? Find out here and good luck!

Meteor Shower Mania: How Well Do You Know 'Shooting Stars'?

If you do catch sight of tonight's meteor shower, keep in mind that you'll likely be seeing the incandescent streak produced by material that originated from the nucleus of Halley's Comet. When these tiny bits of comet collide with Earth, friction with our atmosphere raises them to a white heat and produces the effect popularly referred to as "shooting stars."

So it is, that the shooting stars that we have come to call the Eta Aquarids are really an encounter with the traces of a famous visitor from the depths of space and from the dawn of creation.

Halley's Comet travels around the sun in an elliptical orbit that takes it beyond the orbit of Neptune and as close to the sun as inside the orbit of Venus; a trek that takes roughly 75 years to complete. Halley made its last visit to the sun in 1986 and will return to the vicinity of the sun and Earth in summer 2061.

I'd love to be around to greet Halley when it returns, but that's not likely to happen. You see, I was 30 years old at its last appearance; I'll stick to my vitamins and do a lot of good wishing, but . . . well, you do the math. It's possible, not probable.

And yet, during these next few mornings, both you and I will have a chance of sighting a few pieces of Halley zipping through our atmosphere in the form of meteors.

The orbit of Halley's Comet closely approaches the Earth's orbit at two places. One point is in the middle to latter part of October, producing a meteor display known as the Orionids. The other point comes in the early part of May, producing the Eta Aquarids.

Editor’s note: If you snap a photo of an Eta Aqaurid meteor tonight and you’d like to share it with Space.com for a story or image gallery, send images and comments in to: spacephotos@space.com.

Joe Rao serves as an instructor and guest lecturer at New York's Hayden Planetarium. He writes about astronomy for Natural History magazine, the Farmer's Almanac and other publications, and he is also an on-camera meteorologist for News 12 Westchester, N.Y. Follow us @Spacedotcom, Facebook and Google+. Original article on Space.com.