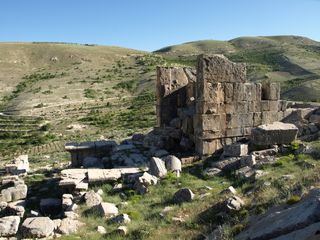 The remains of the temple at Hosn Niha, likely built during the second century A.D. Look for the village settlement below the temple on the left of the picture.
(Image: © Ruth Young)

Despite damage from war, looters and agricultural activity, a Roman temple and settlement high in the Lebanese mountains still hold clues about the ancient and medieval people who once lived there, a new study finds.

Until now, little was known about Hosn Niha, a Roman-Byzantine village located in the Bekaa Valley in Lebanon, the researchers said. Built in approximately A.D. 200, the village was home to a Roman temple and a small settlement, they said.

In the early 1900s, German archaeologists studied the remains of the temple but paid little attention to the neighboring settlement, which they described in a 1938 study as "a picture of complete ransacking," adding that hardly a trace remained of the settlement's inhabitants. [See Images of the Roman Temple and Remains at Hosn Niha]

During the Lebanese Civil War (1975 to 1990), military activity and looting took a heavy toll on the remains of Hosn Niha. In the late 1980s, treasure hunters riding bulldozers scraped through the village, moving and damaging ancient clues buried in the ground, according to the new study.

But "even though the core of the village has been irreparably damaged, a significant amount of the site remains in situ [in its original place] and with enough surviving features and structural evidence to warrant further investigation," the researchers wrote in the new study, detailed in the April issue of the journal Antiquity.

Their diligence paid off. An analysis of pottery shards scattered around the village shows evidence of a large Greco-Roman settlement and a later medieval occupation, likely during the 13th or 14th centuries, the researchers said.

"What we were trying to do is show that sites that have been quite badly damaged by conflict shouldn't just be ignored and forgotten," said study researcher Ruth Young, a senior lecturer of archaeology at the University of Leicester in England. "I think that what we have now is a lot more knowledge about how villages operated and [their] connection with the temple."

'Blimey, what a mess'

When the researchers arrived at Hosn Niha, they found bulldozed piles — some reaching 13 feet high (4 meters) — of pottery fragments mixed with dirt, the researchers said.

"When you first look at the site, you think, 'Blimey, what a mess. Where do we even start?'" Young told Live Science.

But the bulldozers hadn't pushed the pottery fragments far from their original spots, usually less than 164 feet (50 m), the researchers said. They quickly got to work, using a precise form of global positioning system (GPS) called differential GPS to map architectural fragments, such as door thresholds, columns and stone walls.

The researchers' understanding of the settlement grew as they carefully mapped the structures and dated the pottery fragments. They suggest a settlement was firmly in place by A.D. 200, with a dense area of dwellings in the central village and more dispersed courtyard dwellings skirting the village, the researchers said.

The village likely diminished by the 600s during the early Islamic period, though it's unclear why, they said. Today, the most complete remains of the site belong to the Roman temple, which still has walls standing 33 feet (10 m) high, the researchers said. [Gallery: Aerial Photos Reveal Mysterious Stone Structures]

The early inhabitants likely farmed in the valley, possibly growing grapes for wine, the researchers said. "This might explain why they were able to build such big temples," said study co-author Paul Newson, a professor of history and archaeology at the American University of Beirut in Lebanon. "If they were doing wine, they could do it as a cash crop."

The researchers also found glazed pottery shards, characteristic of the early medieval period, scattered around a stone structure, suggesting the structure was a medieval development, he said.

Looters had robbed a cemetery to the east of the settlement, but the archaeologists still studied the tomb types, including stone sarcophagi, individual cist (stone-lined) tombs and communal rock-cut tombs, they said.

The study is a "very good piece" of survey work "that could have been carried out at any archaeological site/landscape that had been damaged, or partially damaged," said Peter Stone, a professor and head of arts and cultures at Newcastle University in the United Kingdom, who was not involved with the study.

Many archaeological sites have been damaged over the ages. "So there is a positive that shows that sites believed to have been made totally useless specifically as a result of conflict do, or at least might, in fact still have valuable information to provide," Stone said.